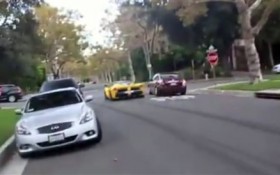 Did these American cops just let a Middle Eastern sheikh escape justice? According to the Associated Press, the man who allegedly said he owned a Ferrari caught on film speeding recklessly through a Beverly Hills neighborhood apparently has raced out of town Thursday.

No arrest was made. Khalid bin Hamad Al Thani of Qatar simply left the country and the cars are gone, authorities said at a news conference.

Al Thani owns a drag-racing team and is a member of the ruling family of oil- and gas-rich Qatar. An aficionado of fast cars, Al Thani routinely has been photographed racing cars on racetracks, including a Formula 1 racer.

The state-run Qatar News Agency did not immediately report on the incident Friday, the start of the country’s weekend. Authorities in Qatar and at the Qatari Embassy in Washington could not be immediately reached for comment.

The bright yellow, 12-cylinder LaFerrari, which can sell for around $1.4 million new, was spotted along with a white Porsche zooming dangerously down narrow streets and blowing through stop signs on Saturday evening until they finally pulled into a driveway, the Ferrari’s engine smoking.

Officers answering reports of reckless driving found both cars parked in a driveway. A man told the officers that the cars belonged to him, police said.

There is no word on why Al Thani was then allowed to leave the country with his cars during an ongoing investigation.