Cop was ambushed "in the name of Islam", ISIS - The Horn News 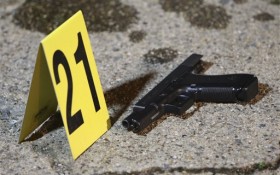 The gunman that ambushed a police officer as he sat in his marked cruiser at an intersection in Philadelphia did so “in the name of Islam” and had pledged allegiance to ISIS, according to Philadelphia’s police commissioner. The alleged terrorist shot the officer in a barrage of bullets and tried to flee before being apprehended, officials said Friday.

“This is absolutely one of the scariest things I’ve ever seen,” Ross said at a news conference early Friday. “This guy tried to execute the police officer. The police officer had no idea he was coming.”

He said the officer was in his cruiser in West Philadelphia when the shooter approached from the sidewalk and began firing, eventually shooting through the driver’s-side window as he got closer.

“I’m bleeding heavily!” Hartnett shouted into his police radio when he called in to report shots fired.

The suspect ran away but was quickly apprehended by other officers, authorities said.

There was no immediate word on the suspect’s condition. Officer Christine O’Brien said the man was struck at least once in the buttock.