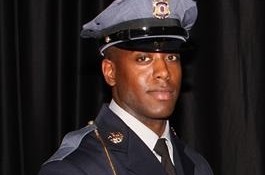 It was a pre-planned ambush. It was without warning. And the heinous attack has both police and citizens alike desperate to know why.

Two brothers last evening sprayed with gunfire a police precinct in Prince George’s County, just outside of Washington, D.C., killing an officer in what the police chief called an “unprovoked attack.”

Prince George’s county police chief Hank Stawinski said the shooter opened fire on the first officer he saw outside the station around 4:30 p.m. Sunday in Landover, a suburb about 10 miles northeast of downtown Washington, D.C.

A gun battle followed, with several officers shooting at the suspect, who was wounded, Stawinski said at a news conference. On Sunday night, hours after the shooting, Stawinski had few answers for reporters about what led to the gunfire.

“It wasn’t about anything,” he said of the shooting, which claimed the life of a four-year veteran of the department who would have turned 29 years old this week.

Police were going about their business on the quiet, rainy Sunday afternoon when the gunman fired at the first officer he saw outside a Maryland police station, prompting a gun battle that left undercover narcotics officer Jacai Colson fatally wounded.

Authorities said Colson was pronounced dead at a hospital and the suspect was wounded but expected to survive.

Speaking at the Sunday evening news conference, Stawinski said that once the first shot was fired, several officers fired back at the suspect. He couldn’t say how many shots were exchanged in the confrontation.

“Those officers did not shrink. They bravely advanced and engaged this individual,” the chief said.

Prince George’s County State’s Attorney Angela Alsobrooks called the shooting an “act of cowardice” and a “horrific act of evil.”

She promised an aggressive investigation and prosecution of the suspect and another suspect arrested soon after the shooting.

Stawinski said the second man was believed to have been present with the suspected shooter when the shots erupted, but fled and was later arrested. Since then, a third brother has also been arrested.

The Washington Post reported that the shooters were identified as Malik Ford and Michael Ford, both of Temple Hills, by the two men’s aunt, Erica Thomas, 39, of Washington.

“I just want to know where they’re at,” Thomas told the newspaper, but failed to give the suspects motive. “What we wanna know is why did all of this happen? What caused this? That’s what we wanna know.” and that if her nephew may have been shot by officers, “I apologize if that’s the case, but all lives matter. Where is my nephew?”

One woman nearby grabbed her sleeping 14-month old baby from his play pen when she heard what she thought might be either firecrackers or gunshots. The woman told the newspaper she looked outside and saw a man dressed in black firing a handgun.

“He fired one shot, and then he started pacing back and forth, then fired another shot,” said Lascelles Grant, a nurse. She added that police began pouring out of the station. “Just looking outside, I’m like, ‘Oh my God, look at all these police officers running out, putting their lives really in danger.'”

Immediately after the shooting, police advised residents near the police station to stay inside, and others to avoid the area, because of an “active shooter” situation. They later lifted the “shelter in place” advice.

“The officers are devastated,” Stawinksi said later after the officer was pronounced dead.

The FBI and the Bureau of Alcohol, Tobacco, Firearms and Explosives are aiding local police in the investigation, spokesmen for the two federal agencies said.