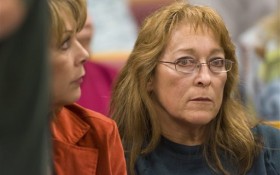 FLAGSTAFF, Ariz. (AP) — A boy charged with killing his father and another man when he was 8 years old has been cleared by a judge to transition into a foster home and enroll in public school, prompting outrage from the prosecutor and the family of a victim.

The boy, now 15 years old, was a third-grader when police accused him of using a .22-caliber rifle to shoot his father and his father’s friend as they returned home from work in 2008, making him one of the youngest homicide suspects in the U.S. No exact motive was revealed, although the boy referred to spankings in discussions with child welfare investigators.

The boy pleaded guilty to negligent homicide in the death of Tim Romans, 39. Prosecutors dropped a premeditated murder charge in his 29-year-old father’s death in exchange for the plea.

The agreement called for the boy to be sent to treatment facilities and undergo intensive probation until he’s 18. His latest evaluations show he doesn’t pose a threat to himself or others, allowing him to join a regular classroom and move to a foster home that’s more like a family setting, his attorney Ron Wood said.

“He’s not just a teenager. He’s the teenager who murdered his father, so that puts him in a special category of scrutiny,” Wood said.

The prosecutor and Romans’ widow are upset that he is being allowed to return to society. Tanya Romans wondered what precautions will be taken to ensure he doesn’t run away from school, and whether or not students and teachers would be made aware of his history.

“You don’t know what he’s capable of,” she said. “I wouldn’t want him anywhere near my family.”

“Based on the reports I’ve read, based on the things that have gone on since the time of the murders, I don’t think we can say, ‘Yes, he is safe. He’ll be fine in public schools. No worries whatsoever,'” Whiting said.

It’s not clear where the boy will attend school, but Wood said it won’t be in St. Johns, a small community about four hours northeast of Phoenix. The Associated Press has not named the boy because of his age.

The boy was placed at a Youth Development Institute facility before being moved to a group home in the Phoenix area. In 2012, Whiting filed a petition to revoke the boy’s probation, accusing him of 25 violations that included smashing a wall clock, making death threats and leaving the treatment center without permission. All but three of those charges were dropped.

The boy’s family on his father’s side routinely attends court hearings and visits him at the treatment facility, but his mother has been in and out of his life. Stauffer issued an order recently for his mother to explain why she hasn’t been turning over his Social Security payments to help offset the cost of treatment.

Wood said his client has made substantial progress since a psychologist took an active interest in his well-being, and he wants to play football, learn how to drive a car, kiss a girl and be a regular kid.

“He has been doing remarkably well, and now (is) a young man, not the kid we saw before,” he said. “At least in this case, the system has finally given him the tools he needs to be a success, and he is making the most of it.”

Xavier McElrath-Bey, who had a string of arrests before being convicted of a gang-related murder at age 13, said children who commit violent acts have a lower rate of recidivism than adults. Their best chance for success comes when they can envision having a normal life and have a support network, he said.

McElrath-Bey served 13 years of his 25-year sentence in the murder case and now serves as coordinator of the Incarcerated Children’s Advocacy Network.

“If you had seen me at that time, you would never have imagined I’d change,” he said. “I think that’s indicative of what we see overall. Eventually, everyone is going to mature.”

Transitioning to a therapeutic foster home will allow the boy to be in a less-controlled setting and help him develop connections with a family, as opposed to being in a dorm-style setting, said Meghan Arrigo, associate director of child welfare policy at the Children’s Action Alliance who isn’t involved in the case.

Roger Jacks, superintendent of the Kingman Unified School District and a member of the state education board, said any school that is approached should talk with its lawyers to ensure that the rights of the boy and the students are safeguarded.

“There has to be a certain amount of confidence in the system, that the system is doing the right thing and that the interventions that they’ve had with this young man prepare him to have a second chance and be out in public education,” he said.