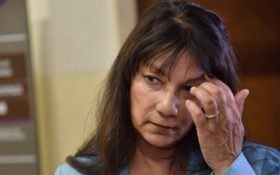 The only American to serve a sentence in the CIA-organized kidnap of a Muslim cleric in Italy has skipped the country, her lawyer confirmed Tuesday.

A lawyer for Sabrina de Sousa confirmed that she had left Italy with some months remaining in her three-year community service sentence for her role in the 2003 kidnapping of the cleric, known as Abu Omar, from a Milan street as part of the CIA’s extraordinary renditions program.

De Sousa has denied any wrongdoing in the kidnapping. She was arrested only after setting foot in Europe, and Italy reduced her seven-year sentence to three.

De Sousa told the Milan daily Corriere della Sera on Sunday that she returned to the United States because she feared for her safety, citing Italy visits by U.S. intelligence officials investigating events leading to the Russia inquiry.

“I am terrified of the consequences that I could face,” the newspaper quoted her as saying.

She added that a visit by CIA director Gina Haspel “confirmed to the Italian government that the U.S. administration has washed its hands of my case.”

She claimed that her arrest in Portugal coincided with a visit by then-CIA director John Brennan.

De Sousa’s Italian lawyer Andrea Saccucci said she would expect to face additional sanctions for leaving in the middle of her community service. She started serving nearly two years ago near Rome, and was likely to have had the term reduced for good behavior.

De Sousa also has filed a case in the European Court of Human Rights against Portugal related to the use of state secrets in the Italian prosecution.

De Sousa, who also has Portuguese citizenship, was picked up on a European arrest warrant at Lisbon Airport in 2015.

She is one of 26 Americans, mostly CIA agents, tried in absentia and convicted in the only trial anywhere in the world involving the CIA’s extraordinary renditions program of terror suspects, a practice alleged to have led to torture. Full or partial clemency was issued in four cases, including De Sousa’s.

The case involving the kidnapping in broad daylight from a Milan street of Muslim cleric, Osama Moustafa Hassan Nasr, was an embarrassment to U.S.-Italian relations. Despite repeated requests from prosecutors, no Italian government ever sought to extradite any of the Americans, even after convictions were confirmed by Italy’s highest court.