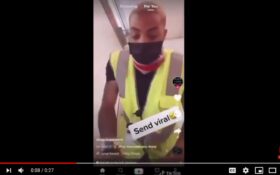 In the deluge of allegations of voter fraud and lawsuits over the 2020 election, it seems pranksters are trying to get the better of people on social media.

A video was recorded and shared by a TikTok prankster named “Big Choppa” — Dale Harrison — who later came forward and said it was a joke meant to get attention to his social media channel.

While some users were initially shocked by the controversial “prank” video, others on conservative media sites weren’t so easily fooled.

Users on a Trump fan site pointed out he wasn’t wearing a poll worker uniform, but instead a uniform from a job at the Amazon shipping facility.

Others pointed out that the original video also had a laughing emoji on it with a “send it viral” message attached — hardly the mark of a crazed postal worker out to destroy what he called “Donald J. Dumb Trump” votes.

Harrison confessed that it was a prank on Facebook later.

“Sooo I did this video in my Amazon outfit cause y’all know I’m always joking!” he wrote. “And it’s getting crazyyyy views! They A** finding me on every app!!!! So when do I move to Hollywood??? Hahahah.”

He said he was unapologic about the poor reception — because the prank video had gone viral.

“It’s a joke. I’ve never worked for them… that’s my Amazon outfit!” he wrote later. “But it’s getting me views! … I really don’t hate Trump! He actually gave me a check!!! But yea I’m just letting them eatttttt it up!!!!”

You can see the controversial video here —

Looks staged same room for all the videos… Anything for likes these days ???? pic.twitter.com/NYrRYQbJKn