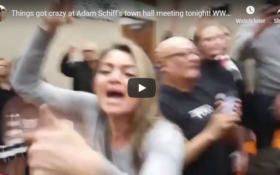 Conservative activists struck back at an event hosted by House Intelligence Committee Adam Schiff, D-Calif., this week — and their protest methods have caused a huge amount of controversy.

Schiff was speaking at a town hall when pro-President Donald Trump supporters crashed the event and interrupted the impeachment leader with boos and chants. Schiff gave up and left the stage.

Controversially, though, the event was considered a bipartisan meeting meant to recognize victims of the Armenian genocide, established by the Armenian National Committee of America.

The video begins as Schiff is being introduced, and a smattering of cheers filled the auditorium… but in the background boos are heard loud and clear.

Shortly afterward a voice in the crowd began to scream: “LIAR!” he shouted at the top of his lungs. “LIAR!” he repeated, getting Schiff’s attention as the Democrat stammered through his speech.

It turns out that the man was just one of many Trump supporters who had been planning to protest during the event, and the video shows that he is joined by others in the crowd holding signs, which read “Don’t Impeach.”

The pro-Trump supporter was quickly confronted by Schiff supporters and liberal sympathizers — who demanded that the pro-Trump protester get “out!” — and the once-peaceful town hall quickl descended into chaos.

The pro-Trump supporter had been slowly escorted out of the auditorium by what looked like security, but not before he shouted that Schiff would be “going to jail for treason!”

Both sides began shouting over each other, and many in the crowd took their phones out to record the pandemonium.

A scrum broke out when people began pushing, shoving and tugging over a man’s “Re-elect Trump” flag.

Schiff can be seen in the video with a very disappointed expression.

What do YOU think?

Was this too far for pro-Trump supporters?

Or are conservatives just using the liberal playbook to make their point?

Did the protesters go too far in confronting Schiff?