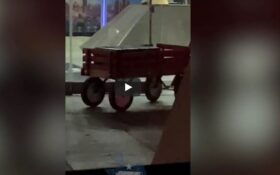 A controversial video went viral late Wednesday after a website showed a wagon with a strange black box — as well as photos of coolers and other suitcases — being wheeled into a polling center into the TCF Center where Michigan vote counting is happening.

Conspiracy theorists claim the video showed voter fraud happening in real-time. As votes trickle in during a tight race for president, concerns about voter integrity have been rampant and tensions are running high.

The video, first reported by the conservative news site TexasScorecard.com, quickly went viral. As of Thursday, it has been viewed “millions of times” on various social media sites.

You can see the controversial video for yourself —

While the video is hair-raising for supporters of President Donald Trump that are concerned about potential voter fraud, the truth is apparently far less exciting.

A local news station quickly came forward and said they have proof to debunk the video.

According to WXYZ Detroit, the video simply showed camera boxes and other film equipment being loaded into the site by their film crew.

The station posted a picture of the wagon in question holding the black cargo box — a Pelican case commonly used by film crews — on social media.

This is a wagon.

It is not "suspicious" equipment that was used to steal ballots.

Thanks for coming to our TED Talk.

They also sent local reporter Jenn Schanz out into the field to dispel the rumor.

FACT CHECK: A video claiming to show voter fraud and a wagon being loaded outside of the TCF Center in Detroit is actually video of a WXYZ photographer loading his camera and other gear into a wagon for work.