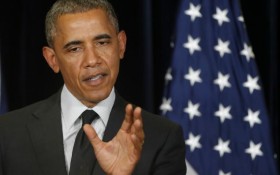 There’s outrage in Congress over the Obama administration’s handling of the U.S. Army Sgt. Bowe Bergdahl case and some lawmakers are claiming the president’s actions broke the law.

House Republicans are claiming in a new report that the White House knowingly misled Congress about the effort to release five Taliban detainees at Guantanamo Bay for  Bergdahl, who was held captive by the militant group for nearly five years. Bergdahl was captured after he allegedly deserted his post in a combat zone.

Republicans on the House Armed Services Committee released a 98-page report Wednesday on its inquiry into the case of the so-called Taliban Five after lawmakers expressed outrage that the Obama administration did not give Congress a 30-day notice about transferring the detainees to Qatar, as required by law.

The five Taliban leaders, held at the military prison in Cuba, were informed that they were being released two days before the administration told Congress, the report said. They were put on a plane bound for Doha, Qatar on May 31, 2014, less than three hours after Bergdahl was released into U.S. custody.

Bergdahl of Idaho, was charged in March with desertion and misbehavior before the enemy, a charge that carries up to life in prison.

The probe into the exchange involved 16 classified interviews totaling 31 hours, perusing more than 4,000 pages of written material, trips to Qatar and Guantanamo Bay and the review of several hours of classified video about the preparations for the transfer and how the five were flown to Qatar.

The report from House Republicans reiterated lawmakers’ complaint and a General Accounting Office finding that the transfer violated the National Defense Authorization Act and other laws. It said the Pentagon’s own Office of Detainee Policy was kept out of the loop about the prospective exchange.

“In the months preceding the Taliban Five transfer, the administration did not communicate any of the specifics or contemplated courses of action to the committee, and the information it did convey was misleading and obfuscatory,” the report said.

A Taliban statement to The Associated Press in June 2013 “contained more specifics about a prospective exchange than what was conveyed through official channels to the committee and others in Congress at the time,” the report said.

When news reports surfaced hinting at a swap, the report said administration officials told lawmakers that the U.S. was not engaged in direct negotiations with the Taliban, which was only true because the Qataris were acting as intermediaries.

Moreover, the committee Republicans said they do “not have confidence” that the Defense Department has clearly established who is responsible for making sure that Qatar abides by a memorandum of understanding it signed with the U.S. outlining how it would monitor the activities of the five after their release.

“Some of the Taliban Five have engaged in threatening activities since being transferred to Qatar,” the report said.