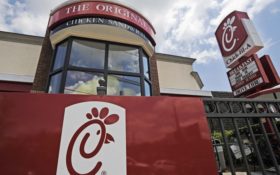 Conservatives are calling out Chick-fil-A for acting like a chicken after a move many see as caving to relentless pressure and years of bullying from the politically correct left.

The company has announced that its charitable arm is cutting off donations to a number of Christian organizations, targeting faith-based groups that oppose same-sex marriage.

The charitable giving has become a chicken bone of contention as rapid expansion has turned the company into the nation’s third-biggest fast food chain. Some of Chick-fil-A’s expansion plan were thwarted as they’ve lost out on prime locations in PC places – like college campuses – due to pressure from the left.

That never seemed to bother the company in the past.

It not only withstood the bullying, but used that defiance to bill itself as different from the rest – not just because of its food, but because of its commitment to faith and conscience.

“They’re going to lose a lot of supporters on the right who feel like they surrendered to nasty, censorious cancel culture,” he said.

Then, he sounded an even more ominous warning, telling the company that the move won’t satisfy the left.

“Once you give an inch to the left with regard to your fundamental principles, the left will never stop,” he said.

Chick-Fil-A has survived and thrived because they served everyone AND refused to cater to the cancel culture. Now they’ve caved at the behest of the censorious Left. This is a terrible move and just the latest indicator that the center cannot hold. https://t.co/dyb0Vbp5QS

Chick-fil-A’s cuts include support taken from the Fellowship of Christian Athletes, a Missouri group that provides sports camps for underserved youth, and an organization called Paul Anderson Youth Homes.

But the biggest name on the cut list is one everyone knows – because it’s one of the most venerable service organizations in America: the Salvation Army.

That’s not only a knock on the Salvation Army itself.

It’s also an ugly judgment on the millions of Americans who toss their spare change into the kettle as they step out of a supermarket after some holiday shopping.

The Salvation Army says it helps 23 million downtrodden Americans every year, including those in the very same LBGT community that’s been attacking Chick-fil-A.

“In fact, we believe we are the largest provider of poverty relief to the LGBTQ+ population,” the organization told Fox News. “When misinformation is perpetuated without fact, our ability to serve those in need, regardless of sexual orientation, gender identity, religion or any other factor, is at risk.”

But even that doesn’t seem to pass muster with the “new” Chick-fil-A.

The group insists it’s not caving to PC madness, just restructuring how it donates and will continue to focus on education, homelessness, and hunger. The change will “allow maximum impact” as it gives to “faith-based and non-faith-based charities.”

But those who have stood by Chick-fil-A over the years aren’t buying it, and the company is getting virtually tarred and feathered with bad press.

Former Arkansas Gov. Mike Huckabee… who has defended the company from attacks by the left… called the move a “betrayal.”

In Aug 2012, I coordinated a national @ChickfilA Appreciation Day after they were being bullied by militant hate groups. Millions showed up. Today, @ChickfilA betrayed loyal customers for $$. I regret believing they would stay true to convictions of founder Truett Cathey. Sad.

Rod Dreher, a blogger at The American Conservative, decried the decision as “nothing but gutless surrender.”

Newsmax host John Cardillo said the company’s brand was built around its beliefs and convictions, which led to loyal customers.

“Their customers were brand ambassadors who appreciated that they stood their ground while the rest of corp. America caved to leftist radicals,” he wrote on Twitter. “Now they’re just another fast food chicken place.”

Looks like some people aren’t planning to “Eat Mor Chikin.”