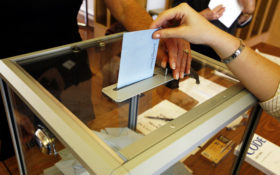 A conservative law firm on Thursday asked a judge to find the Wisconsin Elections Commission in contempt and impose $12,000 a day in fines until it immediately purges more than 200,000 voters from the rolls, a move Democrats are fighting in the key battleground state.

A judge last month ordered the purge of voters who may have moved and didn’t respond within 30 days to notification sent by the elections commission in October. The bipartisan commission has deadlocked twice on attempts by Republicans to do the purge immediately while an appeal to the court order is pending.

Rick Esenberg, leader of the conservative Wisconsin Institute for Law and Liberty that brought the lawsuit, said the commission must purge the voters now. The judge in December ruled that the commission was breaking state law by not removing voters who did not respond to the October mailing asking that they confirm their address.

“Court orders are not suggestions,” Esenberg said on WISN-AM. “They are not rendered inoperative by the fact that you filed an appeal.”

Esenberg filed a motion Thursday in Ozaukee County Court asking the judge to fine the commission and five of the six commissioners $2,000 each, or $12,000 total each day, for being in contempt of the order. The motion does not name one of the three Republicans on the commission who was not on the panel when the legal fight began.

Democratic Attorney General Josh Kaul, who is representing the elections commission in the case, said it “strongly disagrees” with arguments in the contempt motion.

“This case should not effectively be ended before the appeals process plays out,” Kaul said in a statement.

The affected voters come more heavily from Democratic areas of Wisconsin, a key state in the 2020 presidential election. President Donald Trump narrowly won the state in 2016 by fewer than 23,000 votes and Wisconsin is expected to again be one of the most hotly contested states this year.

Democrats fear forcing voters whose registration was nullified to re-register would create a burden on them and hurt turnout. Republicans argue that removing the voters would ensure that the rolls are not full of people who shouldn’t be voting.

The League of Women Voters of Wisconsin also has filed a federal lawsuit to stop the purge. That lawsuit argues that it would be a violation of constitutional due process rights to deactivate the registrations of the voters without proper notice.

The elections commission in October mailed about 232,500 voters to tell them records indicated they had moved and they needed to verify that the address where they were registered to vote was current. Of those, about 209,000 have not requested continuation at their current address or re-registered at another one.

65+? This is the ONLY water you should drink [Sponsored]