Conservatives clean up on Election Day! - The Horn News 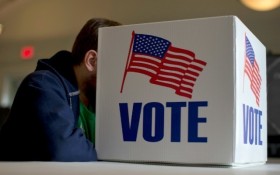 Conservatives stormed to victory in election after election Tuesday, sending a loud message across the country – we have mainstream voter support!

Kentucky voters on Tuesday elected just the second Republican in four decades to hold the governor’s office, in a race that hinged largely on President Barack Obama’s signature legislation, the Affordable Care Act.

The result was a potentially troubling sign for Democrats ahead of next year’s presidential election and represented a big win for the GOP as it continues to consolidate political power across the South. Democrats also were thumped in Virginia, where they made a costly push to win a majority in one chamber of the state Legislature.

The governor’s race in Kentucky was the highest profile contest in Tuesday’s off-year elections. The only other gubernatorial campaign was in Mississippi, where Republican Gov. Phil Bryant easily won re-election.

Elsewhere, Houston voters defeated a closely watched ordinance that would have established nondiscrimination protections for transgender people in the city, and Ohio voters rejected an initiative that sought to legalize the recreational and medicinal use of marijuana.

In Kentucky, Republican businessman Matt Bevin had waged a campaign to scale back the state’s Medicaid expansion that was made possible under the federal health care overhaul. Some 400,000 lower-income people who gained health coverage under the expansion could be affected.

Bevin ran as an outsider, emphasizing his Christian faith along with his support for Kim Davis, the Rowan County clerk jailed for refusing to issue marriage licenses to same-sex couples.

Around the country, several high-profile ballot initiatives tested voter preferences on school funding, marijuana, gay and lesbian rights and the sharing economy. Despite the relatively low number of races, the results could be an important bellwether of sentiment ahead of next year’s presidential elections.

In Virginia, a swing state, Democrats failed in an expensive bid to take control of the state Senate and empower Democratic Gov. Terry McAuliffe in negotiations with Republicans who control the state House. With the losses in Virginia and Kentucky, it was a rough Election Day for Democrats.

In Houston, the nation’s fourth-largest city, efforts to secure “bathroom right” protections for transgender people failed by a 2-to-1 margin. Now that same-sex marriage is legal, such laws have become a priority for gay, lesbian, bisexual and transgender groups. Opponents, including a coalition of conservative pastors, said the measure would have infringed on their religious beliefs.