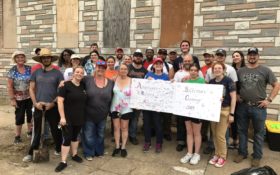 Baltimore, Md. has been back in the public eye ever since President Donald Trump went off on Democrats for letting the city go to ruin.

Under liberal leadership — in part led by Rep. Elijah Cummings, D-M.D., Democrats have let the city down for a long time.

Some conservative supporters, concerned about the well-being of America, put their money where their mouths are.

Led by activist Scott Presler, a coalition of conservatives went to Baltimore and invited anyone who wanted to help for a city cleanup.

“Next week, I’m coming to Baltimore. I’m organizing a trash clean up in the city. If you’re free on a week day, after work, please comment below for more details. #WeAreBaltimore.”

Next week, I'm coming to Baltimore.

I'm organizing a trash clean up in the city.

If you're free on a week day, after work, please comment below for more details. #WeAreBaltimore

According to the Washington Examiner, close to 250 people showed up. Presler coordinated amenities for volunteers such as food, water, and bathrooms.

“We saw a need in the city, and we wanted to come together,” he said.

“Americans helping Americans,” he called it.

So Presler and the volunteers got to work, cleaning streets and alleyways all over west Baltimore. Trash had been piling up for so long under Rep. Cummings that they even found a newspaper from the Obama election… in 2008!

We found this newspaper while cleaning up trash in West Baltimore.

“This isn’t a Trump rally,” Pressler said. “This isn’t an anti-Representative Cummings. This is the community coming together.”

The mass movement drew the support of many, including west Baltimore pastor Tony Hill. “It’s people over politics,” he said. “Things like this really forge alliances between neighbors.”

Take a look at the event below:

This is one of the proudest moments of my life. #AmericansHelpingAmericans pic.twitter.com/TxLY2Ippra

Another lot cleaned up in #Baltimore with @CardinalRebel88 & @Dave_in_Cbus. Shout out to @Dave_in_Cbus for coming all the way from Columbus, Ohio to help out.#BaltimoreCleanUp#AmericansHelpingAmericans pic.twitter.com/VsGKvoupcY