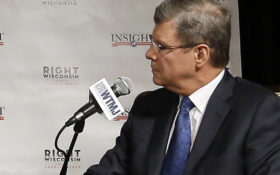 A leading voice in conservative radio who helped promote the Republican political agenda in Wisconsin but was outspoken in opposing Donald Trump, retired from his popular radio show Monday.

Milwaukee talk radio host Charlie Sykes said his decision to end a 23-year run at WTMJ-AM was made before his opposition to Trump garnered national attention. Sykes, a Republican commentator, author and radio host, embarrassed Trump during an on-air interview before Wisconsin’s primary when Trump admitted not knowing Sykes was a leader in the “#NeverTrump” movement.

Sykes recently told National Public Radio’s Michel Martin that his resistance to Trump drew a level of public vitriol he had never experienced.

“There would be nights when I would appear on a cable show and open up my Twitter feed, and there would be 500, 600, 700 reactions. And to say that, you know, many of them were intense is putting it mildly. The level of blowback, I think, that people got, the level of anger was something not totally unprecedented, but it’s just I think in tone and volume was something that I had never seen before,” Sykes said on All Things Considered.

U.S. House Speaker Paul Ryan was among those bidding adieu to Sykes Monday on the air. Ryan, from Janesville, Wisconsin, credited Sykes with challenging what Ryan called a liberal-leaning media.

“The left had arguably a monopoly on information through the media. There was really no one challenging the premise of what was being fed in Wisconsin,” Ryan said.

“You smashed that model. You crushed it and helped bring a disinfectant into our political system in Wisconsin that gave rise to what I would call truth. That gave rise to classic conservatism. That gave voice and audience and space and oxygen to the likes of myself, Ron Johnson, Scott Walker,” Ryan said.

Johnson last month won a second term as Wisconsin’s Republican U.S. senator. Walker has been the state’s governor since 2011.

Sykes said he regrets not drawing the line more strongly against conspiracy theorists and “crackpots” on the right.

“It’s the crazy uncle at Thanksgiving, and we’ll just, you know, give him another gin and tonic and ignore him?” Sykes said.

If left to do it over, Sykes said he would encourage more dialogue and debate to discourage the polarization of “binary politics.”

Some Democrats are glad his show is ending.

“(He has used) his time on the public airwaves to attack those less powerful, undermine reasonable public discourse and promote his favored Republican politicians and their agendas,” Ross said in a statement.

Sykes said he made his decision to leave his mid-morning show more than a year ago in order to spend more time writing, traveling and being with his family. His father died at age 63, so he had anticipated retiring in 2016 when he turned 62, Sykes said.

Sykes, a political contributor to MSNBC, has written eight books with a ninth in the works titled “How the Right Lost Its Mind.”