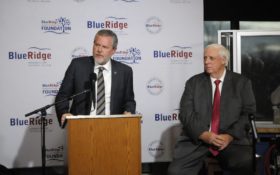 Liberty University President Jerry Falwell Jr. on Tuesday urged unhappy conservative counties in Democrat-controlled Virginia to secede and join West Virginia, where the GOP has firm control of the legislature.

“What’s happening in Virginia right now is a tragedy in the making,” Falwell said. “Democratic leaders in Richmond, through their elitism and radicalism, have left a nearly unrecognizable state in their wake.”

The Epoch Times writes that President Falwell’s endorsement signals a heightened level of support for the grassroots “Vexit” movement — a movement started by conservative activists dissatisfied with recent Democratic rule.

Evidence of conservatives’ frustrations were recently seen on the national stage, when thousands of pro-gun protesters led a march in response to Virginia Gov. Ralph Northam’s liberal policies.

Democrats took full control of the Virginia statehouse in November for the first time in a generation and pledged to roll back abortion restrictions, gun-control measures, and increase state debt.

Their radical agenda sparked a backlash among conservatives and highlights the increasing divide in the United States. The Epoch Times wrote that more than 100 local Virginia counties have signed proposals backing the Second Amendment. The response suggests that the newly-elected Democratic leaders are increasingly out of touch with residents.

“If you’re not truly happy where you are, we stand with open arms to take you from Virginia or anywhere where you may be,” said Justice, who’s running for reelection. “We stand strongly behind the Second Amendment and we stand strongly for the unborn.”

One resolution targets Virginia’s Frederick County, but was met with indifference from the county’s leader. The other casts a wider net to all Virginia’s counties, saying the “government at Richmond now seeks to place intolerable restraints upon the rights guaranteed under the Second Amendment of the United States Constitution.”

“We saw their way of life under attack and we wanted to offer assistance,” said Del. Gary Howell, a West Virginia Republican who sponsored one of the resolutions.

The announcements from Falwell and Justice hasn’t been taken seriously by everyone in Virginia.

“What are they doing, a comedy routine?” said Republican Sen. Emmett Hanger.

“Preposterous,” said Senate Majority Leader Dick Saslaw, a Democrat. Saslaw added that Justice should be focused on solving West Virginia’s high poverty rate and “not screw around in Virginia.”

A spokeswoman for Virginia’s Democratic Gov. Ralph Northam dismissed the idea, saying “As always, Jerry Falwell’s words speak for themselves.”

The process by which such a breakup could occur is murky, but Falwell said lawyers have told him counties in Virginia would first need to conduct petition drives. Then a referendum would be held, and if successful, the proposal would go before Virginia’s General Assembly.

According to The Epoch Times, Frederick County, Virginia still has a standing invitation to join West Virginia from 1862.

Rick Boyer, a Virginia conservative activist attorney and former local elected official, is helping with the so-called “Vexit” push. He said a growing movement of conservative Virginians is serious about leaving a state that he said doesn’t respect their rights.

“This isn’t street theater, we fully intend to do everything we can to see it through,” Boyer said.

University of Virginia law professor Richard Schragger, whose work includes a focus on the intersection of constitutional law and local government law, said the move would require the consent of both states and Congress.

It has expanded from a tiny Baptist school into a touchstone institution for evangelicals. Both Falwell and Justice are ardent supporters of President Donald Trump.