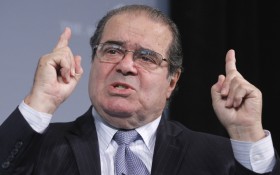 Antonin Scalia, the influential conservative and most provocative member of the Supreme Court, has died. He was 79.

The U.S. Marshal’s Service in Washington confirmed Scalia’s death at a private residence in the Big Bend area of South Texas.

The service’s spokeswoman, Donna Sellers, says Scalia had retired for the evening and was found dead Saturday morning when he did not appear for breakfast.