Conjoined twins to be separated in Texas - The Horn News 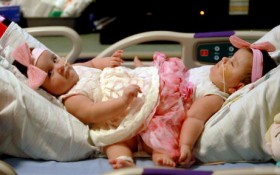 Surgery has started in Texas to separate two 10-month-old sisters born conjoined below the waist.

Ximena (huh-MEE-nuh) and Scarlett Hernandez-Torres share a colon and bladders that will be reconstructed. Their identical triplet sister, Catalina, was born without serious health issues.

The hospital staff has cared for the conjoined girls since they were transferred to the Corpus Christi facility hours after birth.

Dr. Haroon Patel says a team of specialists has been working for months to prepare for the surgery, which could last 12 to 18 hours.

A hospital statement says doctors have a positive outlook for the children’s recovery. The girls will require additional surgeries as they grow.