Congressman: Here's how we impeach Obama - The Horn News 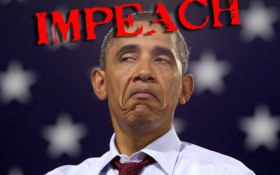 President Barack Obama only has 14 months left in office.

But if some Congressional Republicans – and millions of American citizens – had their way, he’d be packing up a lot sooner.

On a recent episode of the Family Research Council’s “Washington Watch” radio show, Rep. Louie Gohmert of Texas, a member of the powerful House Judiciary Committee, gave an insider’s view on the process and prospects of taking Obama down.

Here’s what we learned:

Gohmert lamented how Obama has lied to the American public about key issues like the Iran nuclear deal, and “just how detrimental this president has been” for America.

And he pointed out that the burden of proof the House needs to bring impeachment charges is actually fairly low.

“It’s left a bit vague as to what’s required… and that was intentional,” he said.

The process is designed to help Congress and the public remove presidents who may be representing America poorly, even in the absence of smoking-gun proof of serious crimes. Impeachment would be followed by a formal trial in the Senate, where a conviction by two-thirds of members would be difficult.

#2: The biggest obstacle is the public, not the votes in the House

While a caller to “Washington Watch” speculated that the votes to impeach Obama don’t exist in the House, Gohmert said that’s not the main issue. He said the real problem is that House members don’t believe there’s sufficient will among the American public to start the process of pulling Obama from office.

“There are not enough people in the country, across America, that want him removed from office before his [term] is over,” Gohmert said.

All of these investigations help expose corruption and wrongdoing that could extend right to the Oval Office.

“I would hope that once we start removing people from office because of the lies, misrepresentation and treason, if that comes out… then we could have a case that could be made involving the president,” Gohmert said.

Gohmert is the second high-profile Republican to discuss impeachment in recent days.

You can listen to the “Washington Watch” radio show yourself below: