The Congressional Gold Medal recipient is... wow! - The Horn News 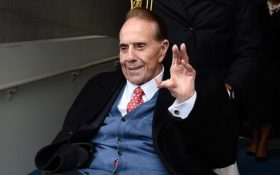 The Kansas Republican, a decorated World War II veteran and his party’s 1996 presidential candidate, will receive Congress’ highest honor during a ceremony in the Capitol Rotunda on Wednesday. President Donald Trump plans to attend. Some of the award’s 300 recipients include George Washington and Mother Teresa.

Dole is considered one of his party’s best dealmakers.