Congress races ahead on spending to avoid shutdown - The Horn News 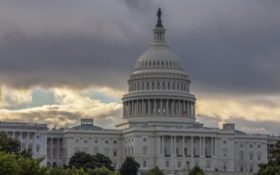 As a potentially catastrophic hurricane heads for the Carolinas, Congress is moving to avert a legislative disaster that could lead to a partial government shutdown just weeks before the November midterm elections.

The House is set to vote Thursday on a $147 billion package to fund the Energy Department, veterans’ programs and the legislative branch. The Senate on Wednesday night approved the measure 92-5.

Meanwhile lawmakers said they will seek to pass a stopgap funding bill for the rest of the government through Dec. 7. Rep. Rodney Frelinghuysen, R-N.J., chairman of the House Appropriations Committee, said the stopgap measure will be attached to a separate spending bill lawmakers are negotiating to fund the Defense Department and labor, health and education programs.

The bill to be approved Thursday is the first of three spending packages Congress hopes to approve this month to avoid a government shutdown when the new budget year begins Oct. 1. It represents a compromise between House and Senate negotiators.

If all three compromise spending packages are approved by both chambers and signed by President Donald Trump, they would account for nearly 90 percent of annual spending, including the military and most civilian agencies.

Lawmakers would still need a short-term patch for a portion of the government, including the Department of Homeland Security, which oversees Trump’s long-promised wall along the U.S.-Mexico border.

Approval of the initial spending bill was so important to Republican leaders that they moved up a vote planned for Thursday, citing the threat of Hurricane Florence bearing down on the Southeast U.S. coast. The storm is expected to make landfall Friday in the Carolinas.

The bill represents a marked departure from recent years, when Congress has routinely ignored agency-specific spending measures in favor of giant “omnibus” packages that fund the entire government all at once. Trump has said he won’t sign another bloated bill, and lawmakers have been working to approve a series of smaller spending measures.

“The American people expect us to get our work done. If we continue to work together in a bipartisan manner, we can successfully fund nearly 90 percent of the federal government on time through regular order — something Congress has not been able to do in many years,” said Senate Appropriations Committee Chairman Richard Shelby, R-Ala.

“This package is not perfect, but that is the nature of compromise,” added Vermont Sen. Patrick Leahy, the top Democrat on the Appropriations panel.

Leahy said he was concerned that the bill does not do enough to cover costs associated with a program that allows veterans to receive government-paid health care at private facilities.

“We do our veterans no favors when we make promises to them that we cannot keep,” he said.

While generally upbeat about the progress on spending legislation, lawmakers from both parties remain wary of a government shutdown, which Trump has threatened unless he gets billions of dollars for the wall — a key Trump campaign promise.

None of the three packages under consideration address spending for the wall, and GOP leaders have said they prefer to address the issue after the midterm elections.

“We still are in favor of the wall, we still want to get funding for the wall, but we think the best time to have that discussion is after the election,” Senate Majority Leader Mitch McConnell told Fox News last week.

Even so, Trump held out the possibility of a shutdown, citing the need to protect the nation’s border by following through on his signature campaign promise.

“If it happens, it happens,” Trump said last week. “If it’s about border security, I’m willing to do anything.”

With Republicans running the White House and both chambers of Congress, GOP leaders worry that voters would blame them for a shutdown, worsening the party’s prospects for retaining congressional control amid an anticipated “blue wave” for Democrats.

The White House in a statement said Trump looks forward to signing the spending package, adding that it “aligns with many of the administration’s priorities.”

The three-bill bundle approved by the Senate on Wednesday features a $5.1 billion increase for the Department of Veterans Affairs, including $1.1 billion to pay for a law Trump signed in June to give veterans more freedom to see doctors outside the troubled VA system.

The bill would require Senate candidates to file electronic campaign finance reports — nearly two decades after the requirement was implemented in the House. Senate candidates currently file paperwork with the secretary of the Senate, who then sends it along to the Federal Election Commission, causing weekslong delays in electronic filing.

House and Senate negotiators nixed several partisan policy riders in the House version, including one that would have repealed the Obama-era Clean Water Rule and another to limit spillovers at dams in the Pacific Northwest to protect salmon.