Congress cracking down on ABC News - The Horn News 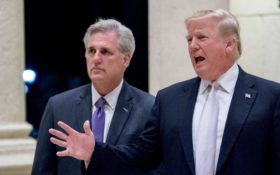 For three years, ABC News buried a story on billionaire pedophile Jeffrey Epstein — and now Congress is cracking down on the liberal news network.

According to The Daily Wire, House Minority Leader Rep. Kevin McCarthy, R-Calif., has contacted the president of ABC News and is demanding answers on the Epstein cover-up.

Sponsored: If You’re Taking This Pill… You’re Gambling With Your Life

The story was spiked, Robach said, because of the explosive links to powerful men like former President Bill Clinton and the United Kingdom’s Prince Andrew.

“I’ve had the story for three years. I’ve had this interview with Virginia Roberts,” the footage shows Robach saying into a hot mic. “We would not put it on the air. First of all, I was told: Who’s Jeffrey Epstein? No one knows who that is, this is a stupid story.”

“Then the Palace found out that we had her whole allegations about Prince Andrew and threatened us a million different ways,” she said. “We were so afraid we wouldn’t be able to interview Kate and Will, that also quashed the story.”

“I tried for three years to get it on to no avail and now it’s all coming out and it’s like these new relevant revelations and I freaking had all of it,” she said. “I’m so pissed right now, like every day I get more and more pissed because I’m just like, oh my god, what we had was unreal. Other women backing it up. Brad Edwards the attorney three years ago saying like, ‘there will come a day for we will realize Jeffrey Epstein was the most prolific pedophile this country has ever known.’”

“I had it all three years ago,” Robach concludes.

“Then the Palace found out that we had her whole allegations about #PrinceAndrew…threatened us in a million different ways. We were so afraid that we wouldn’t be able to interview Kate and Will…That also quashed the story.” – @arobach #EpsteinCoverup pic.twitter.com/fPvJc3s1Li

1. Will ABC News provide Congress the interview Ms. Robach conducted with the victim?

2. What did ABC News learn about Jeffrey Epstein after Ms. Robach first presented her story to executives?

3. Who was involved when deciding this story was not of public interest, and what were their reasons for deciding so?

4. Can Ms. Robach expand on the “outside forces” she mentioned as potentially responsible for the story not running?

5. Was ABC News ever presented with additional evidence on Mr. Epstein from the time Ms. Robach first brought her investigation to the network and when he ultimately was arrested?

6. Were authorities alerted at any time after Ms. Robach presented ABC News executives with her reporting? If so, when and what was provided?