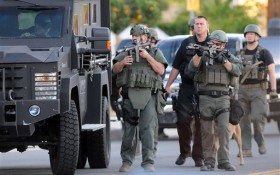 While federal and state authorities work today to gather evidence surrounding one of the worst mass shootings in recent history, a clearer picture is emerging of the Muslim husband and wife who orchestrated the violence.

And it’s becoming increasingly clear that the shootings were an Islamic extremist terror attack that may have been in the works for months. At least one of the shooters, Syed Rizwan Farook, was in touch with “more than one” international terror suspects and was actively being monitored by the FBI. Local law enforcement confirmed he had been radicalized, CNN is reporting.

Farook and wife Tashfeen Malik, 27, were killed in a shootout with police hours after they stormed the Inland Regional Center in San Bernardino, CA, yesterday, killing 14 and wounding 17.

Farook worked for the San Bernardino County Department of Public Health, which was renting space at the center for a celebration. An argument reportedly erupted, and Farook returned about 20 minutes later with Malik and started shooting.

But the advanced weaponry that the two brought to the center strongly suggests that they’d been stocking up to conduct a massacre, possibly for a long period of time.

Both Farook and Malik reportedly returned to the Inland Regional Center with assault rifles, extra magazines, body armor, assault-style clothing, and homemade bombs. It was the type of arsenal that would be impossible for anyone to assemble on the fly in just minutes.

The couple left behind three rigged-together pipe bombs with a remote-control device that apparently malfunctioned, and had over 1,600 more bullets with them when they were gunned down in their SUV, authorities said Thursday.

At their home, they had 12 pipe bombs, tools for making more explosives, and over 3,000 rounds of ammunition, San Bernardino Police Chief Jarrod Burguan said in a grim morning-after inventory that suggested Wednesday’s bloodbath could have been far worse.

“They came prepared to do what they did, as if they were on a mission,” said Burguan said.

Burguan said Farook was born in the United States, but he’d recently traveled to Saudi Arabia where coworkers said he possibly met and married Malik. After his return to the United States, Farook began growing out his beard and was apparently radicalized at some point.

Farook’s father told The Daily News, before knowing his son’s name had become public, that Farook was, “very religious. He would go to work, come back, go to pray, come back. He’s Muslim.”

About four hours after the morning carnage, police hunting for the killers riddled a black SUV with gunfire in a shootout two miles from the Inland Regional Center, killing Farook and Malik.