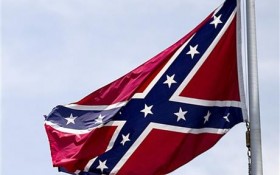 House Republicans sidestepped the divisive fight over displays of the Confederate battle flag at the U.S. Capitol with plans to put up state coins instead.

Rep. Candice Miller, R-Mich., who heads the House Administration Committee, announced Thursday that reproductions of commemorative quarters depicting the 50 states, District of Columbia and the territories will line the wall between the Capitol and the Rayburn House Office Building.

“A print of each state’s commemorative coin will be tastefully displayed for this highly trafficked area, as each quarter serves as a reminder of the ideals, landmarks and people from each state, as well as this nation’s great motto, ‘out of many, one,'” Miller said in a statement.

The walls previously displayed state flags, and Mississippi’s includes an image of the Confederate battle flag. Democrats complained last year that the flag celebrates a murderous, racist past in the nation’s history. The Republican-controlled House was forced to scrap a vote on permitting the Confederate flag at Park Service-run cemeteries in a fierce fight over the issue.

Last July, South Carolina removed the confederate flag from statehouse grounds after 54 years, a move that came weeks after nine people at an historic black church in Charleston had been shot and killed.

The Confederate battle emblem has been on the Mississippi flag since 1894, and voters chose to keep the design in 2001. Since the Charleston slayings, several Mississippi cities, counties and colleges have stopped flying the banner.

Rep. Bennie G. Thompson, D-Miss., welcomed the decision, saying the “symbols of hatred and bigotry” will no longer be displayed in the esteemed halls of the U.S. House.

“I can only hope that this understanding will somehow reach the hearts and minds of the elected officials in the state of Mississippi, and they will follow suit and rid our state of this ultimate vestige of slavery and bigotry,” Thompson said.

Miller said that given the “controversy surrounding confederate imagery, I decided to install a new display.”

The chairwoman said lawmakers could display their state flag alongside the American flag outside individual offices.