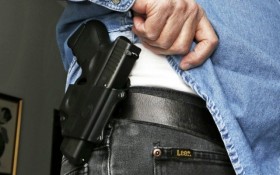 A customer with a concealed carry license prevented a potential tragedy, showing the nation how responsible gun ownership keeps us all safe.

The concealed-carry permit holder shot and killed an armed robber while the robber was threatening clerks at a Chicago neighborhood store, police said Sunday.

A masked man walked into the store and currency exchange about 7 p.m. Saturday on the city’s southwest side, displayed a handgun and announced a robbery to an employee, police spokesman Anthony Guglielmi said. The gunman then pointed his weapon at another employee and forced her to the back of the store.

Because of the armed citizens response, no one else was hurt during the robbery. It is unlikely the customer, who has not been identified, will face charges. Guglielmi said preliminary details suggest the customer was not at fault.

“We’re looking at it as a self-defense issue at this point,” he said.