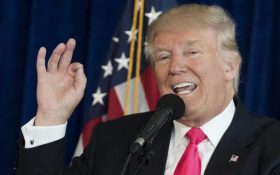 Hillary Clinton has done her best to argue that she has the experience necessary to serve as the next commander-in-chief.

In an open letter released yesterday, 88 retired generals, admirals, and other former military officers said they were backing Trump. In the letter, they claimed that the continuation of President Barack Obama’s policies under Clinton would be a disaster for our fighting men and women.

“The 2016 election affords the American people an urgently needed opportunity to make a long overdue course correction in our national security posture and policy,” said the letter, which was signed by retired Army General Burwell B. Bell III, retired Vice Admiral Mike Bucchi, and many others.

Urging the American public to vote for Trump, the former military brass said we need a leader who can stand up to America’s enemies and defeat Islamic extremism.

And apparently there’s only one candidate in the race who is up to the task.

Trump will outline plans to “add substantially” to the nation’s arsenal of submarines, ships and combat troops in a Wednesday morning speech in Philadelphia, according to a briefing provided by his campaign. Trump’s address comes hours before his national security acumen is tested at a “commander in chief” forum on NBC.

A late morning address at Philadelphia’s Union League will outline his plans to eliminate deep military cuts, known as the “sequester,” enacted when Congress failed to reach a budget compromise in 2011.

Beyond new spending on troops and naval assets, Trump also will call for additions to sea-based missile defense.

On Tuesday night, Trump promised to convene his military commanders soon after taking office with “a simple instruction” aimed at the Islamic State group. “They will have 30 days to submit to the Oval Office a plan for soundly and quickly defeating ISIS,” he told North Carolina voters.

And it’s clear military members have faith that The Donald can get it done.