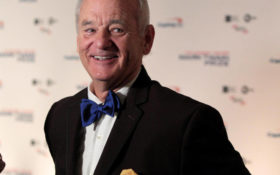 He’s calling out his colleagues on the left for their ugly and divisive tactics… and he’s praising the Republicans for one of their biggest success stories in recent history.

Murray, who has a long history of turning up in unusual and seemingly random places, showed up in one of the most unexpected places yet last week: on CNBC, the cable network devoted to business news.

The star of classics such as “Ghostbusters,” “Caddyshack” and “Groundhog Day” then proceeded to dip his toe into politics – specifically how it relates to his world of comedy.

And his Trump-obsessed pals at “Saturday Night Live” and the rest of the late-night circuit probably won’t like what he said.

“How can (actress and comic) Kristen Wiig make everyone laugh?” he wondered aloud. “She’s not thinking about being political, she’s thinking about what resonates and what is common to all of us and I think that’s harder and harder to do because people are trying to win their point of view as opposed to saying, ‘What if I spoke to everyone?’”

He then referred to a friend of his who’s getting pigeonholed by the left-wing clique that runs the entertainment industry.

“My friend who’s a great comedy writer, Jim Downey, he’s accused of being a right-wing comedy writer, if there is such a thing,” Murray said. “He says, ‘No, I just think the way the Democrats handle things is poor, where they try to pick out little pieces of a population, oh well we represent the Hispanics, we represent the LGBT or something.’”

Who could argue with that?

“It’s almost demeaning to say, ‘I’m choosing you because you’re a splinter group or a certain minority group,’” he pointed out. “There’s almost a resentment that somehow you’re separated, again, by a politician. ‘You’re my people. I’m in control of you, I represent you.’ Instead of thinking that each citizen has a right to be respected as a citizen first, under the laws of the country.”

“I think certainly the change in the tax laws is a great thing for the corporations, it is a fantastic thing,” he said. “I don’t pretend to understand what that will mean in the future in terms of the economy or what the budget will have to do to take care of what people call entitlements. That may or may not work, and I don’t know. But, I think in the first step it’s made things easier.”

But there’s nothing typical about Murray, who insists on going his own way and not playing the usual celebrity games.

Murray has made himself famously hard to reach, firing his agent years ago and leaving only a 1-800 number connected to voicemail as a means of producers and directors getting in touch – and most calls to that line are never returned.

Now it seems he’s separated himself from the Hollywood pack in another way, refusing to engage in their divisive identity politics… and calling them out for it, too.