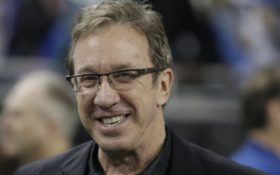 Allen is fed-up with liberal “thought police” and political correctness, and he’s not holding back anymore.

The Hollywood star told co-host Joy Behar that comedy was being stifled by liberals. He said he can’t do things like talk about the late comedian Richard Pryor and his materials without offending someone during big arena shows.

“What I got to do sometimes is explain — which I hate — in big arenas, that this is a thought police thing, and I do not like it,” Allen said in an interview on ABC’s “The View” on Monday. “But when I use these words, this is my intent behind those words.”

“So as long as you understand my intent… and I still get people: ‘Well, just don’t say it,'” he said, mocking critics. “Well, I’m not going to do that.”

He said his comedy set uses “provocative words” and he was surprised no one had taken his comedy out of context yet — but that he was sure it would happen.

Allen later said political correctness was “an alarming thing for comedians” — and he can’t even joke about his family growing up.

“The women in my life — regardless of the political party — always hated the government,” he said, jokingly. “‘Who’s going to pay for it!?’ they would always argue about that over vodka… vodka and cigarettes.”

“If I bring up the whole story of my grandma, who once… because I stole money from my parents, I never worked,” Allen continued. “And my one grandma would say, ‘I think we got us a little Democrat over here.'”

“I do that in Miami? People laugh and cheer. Do that in Reading, Pennsylvania? People go, ‘Ooooohhh, oh nooo!'” Allen said, explaining the area is more “blue” than Miami.

Tim Allen looks back on how standup comedy has changed through the years, discusses the level of political correctness comedians face today: “It is an alarming thing for comedians.” https://t.co/cVclFZQmjA pic.twitter.com/vmmUxg4sD6

This isn’t the first time Allen has spoken up against the Democrats and their toxic politics.

And he’s not alone.

When accepting the Mark Twain Award in October, comedian Dave Chappelle said in October he’s willing to stand up for the right to free speech for Americans.

“Don’t get mad at ’em, don’t hate on ’em,” Chappelle said of offensive comedians. “Man, it’s not that serious. The First Amendment is first for a reason.”

“And the Second Amendment is just in case the first one doesn’t work out,” he said.