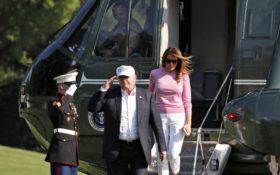 A comedian says he spoke with President Donald Trump by phone after posing as a senator and that the call was patched through while the president was aboard Air Force One.

Comedian John Melendez, known as “Stuttering John” from his years on “The Howard Stern Show,” released audio of his prank call with Trump on his podcast last Thursday.

Melendez claimed to be Democratic Sen. Bob Menendez of New Jersey and said he was connected to Trump while the president was traveling after a Wednesday night rally in North Dakota.

Avenatti confirmed late Sunday that Melendez was his client, adding that he had been in touch with the Secret Service, but said no interview was planned for Monday.

The White House was told Thursday that Menendez hadn’t reached out to Trump, said a person familiar with the call who spoke on condition of anonymity to discuss it.

As played on Melendez’s “Stuttering John Podcast,” the conversation with Trump was relatively benign, with the president greeting the senator as “Bob” and offering “congratulations on everything.” He added: “Congratulations, great job. You went through a tough, tough situation and I don’t think a very fair situation, but congratulations.”

Menendez’s trial on corruption charges ended in a hung jury and a mistrial last year, and the Justice Department early this year decided to drop all charges against him.

Melendez, pretending to be the senator, told the president that “obviously my constituents are giving me a lot of beans about this immigration thing.” He asked what he could tell them was being done.

In response, Trump said he wanted to take care of the situation “every bit as much as anybody else” and went on to cite his standard position on immigration reform.

Asked if he would go more moderate or more conservative in his selection of a Supreme Court justice to replace retiring Justice Anthony Kennedy, Trump said he had “a big list of people … and we’ll take a look at it.”

Melendez closed by saying, “All right, Baba Booey to you” — a reference to the Stern show.