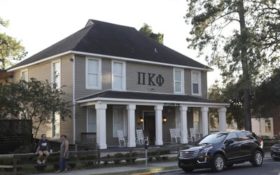 Florida State becomes at least the third university this year to suspend Greek life because of alcohol-related tragedies.

University President John Thrasher announced the indefinite suspension on Monday of the school’s 55 fraternities and sororities following the death of a junior pledge.

“I just feel like for whatever reason, the message is not getting through,” Thrasher said. “Unfortunately we’ve got to take steps with our students, to make sure this never happens again.”

During the suspension, the only events Greek life members may conduct are meetings with the university or their national chapter. They also cannot have any organized participation in homecoming activities, which are scheduled for next week.

“It will be more tame and not as festive as it usually is because there are a lot of floats during the parade and competitions during the week,” said Rachel Humphries, who is a Florida State student.

Students will be allowed to remain as residents in their fraternity or sorority house. Thrasher also banned alcohol at all student organization events during the suspension.

Andrew Coffey, a pledge at Pi Kappa Phi, died Friday after he was found unresponsive following a party. Police said there were indicators that alcohol may have been a factor, but authorities were waiting for the results of an autopsy before determining a cause of death. Tallahassee Police Chief Michael DeLeo said they are still investigating.

The registrar’s office said Coffey was a junior and that this was his first semester as a Florida State student.

On Monday, Garrett John Marcy, a member of Phi Delta Theta, was charged with the sale and trafficking of cocaine. Marcy, 20, was arrested by Florida State University police and booked into Leon County jail, where his bail was set at $75,000.

“For this suspension to end, there will need to be a new normal for Greek life on campus. They must participate in that culture,” Thrasher said.

Penn State suspended fraternities and sororities from holding social activities during the spring semester after the February hazing death of 19-year old Timothy Piazza. Louisiana State had a one-month suspension and continues to ban alcohol at Greek parties after the hazing death of 18-year old Maxwell Gruver in September.

Florida State students were surprised about the announcement and were still trying to get information on how this affects their organizations going forward.

“I was very surprised that they are doing something about it. I think hazing is a problem and alcohol is the basis of a lot of their events,” said Abygail Stiekman.

Freshman Lila Pullo, who was supposed to be initiated into the Delta Gamma sorority, did not agree with the decision to suspend all Greek organizations

“For me and a lot of the people who are entering we’re all pretty upset because we are trying to get the reputation back up,” she said. “Most of the organizations getting in trouble are fraternities. If they did end Greek life the atmosphere on campus will go down a lot.”

Wake up, America! This miracle changes EVERYTHING [Sponsored]

John Armstrong, who served as president of Florida State’s Beta Theta Pi chapter in 1998, said he had mixed feelings about Monday’s announcement.

“Unfortunately, there has been a rash of instances similar to this, so I can understand the reason for the response,” Armstrong said. “I hope that it’s a short-lived response.”

“It might be a good idea for people to take a step back and reflect on what values we truly want to portray in the Greek system,” Armstrong said.

Douglas Fierberg, a wrongful death attorney whose firm has represented clients who have sued universities and fraternities for hazing deaths, is skeptical about any changes that Florida State or other universities can make. Fierberg also has suggested that universities start having accurate reports of incidents at fraternities and sororities so that parents are more informed.

“I wouldn’t count on the fraternities to demonstrate one thing to me. I wouldn’t place it in the lap of the Greek organizations,” he said. “For a president to pretend to look at how they will be compliant is ridiculous.”