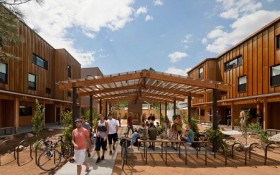 It’s angered conservatives and is considered by critics to be a slap in the face to poor, legal students.

But Prescott College in Arizona doesn’t seem to mind the criticism, and are proudly bragging to the media about their plan to charge current students to give away free college to illegal immigrants.

The private college is has announced they will tact on to its current tuition a fee, intended to fund a scholarship to pay for illegal immigrants to attend.

The school has added the $30 fee to its current $28,000 annual tuition to setup the Freedom Education Fund, an illegal immigration scholarship for “undocumented” students. The fund was developed in part by students and faculty from the Social Justice and Human Rights Master of Arts divisions.

For taxpaying students, this fee will be just another in a long line of costs attributed to illegal immigrants.

According to research conducted by The Heritage Foundation, “In 2010, the average unlawful immigrant household received around $24,721 in government benefits and services while paying some $10,334 in taxes. This generated an average annual fiscal deficit (benefits received minus taxes paid) of around $14,387 per household. This cost had to be borne by U.S. taxpayers.”

Students are able to decline paying the fee, but have to speak up first. If they do nothing — or are unaware they can opt out — the fee will be automatically added to their tuition.

The director of policy studies at the Center for Immigration Studies, Jessica Vaughan, told Fox News that she considers this an insult to poor students that live in the country legally.

“It is beyond absurd that this college is going to force all the students to subsidize the education of a student who is in the country illegally,” Vaughan said. “It’s a shame these students and faculty don’t have the same drive to help some of their fellow citizens who can’t afford college and who are forced to compete with illegal workers for job opportunities.”