Heartwarming! Student walks 20 miles to work, and then... - The Horn News 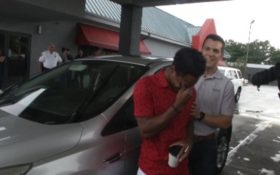 An Alabama college student with hopes to join the U.S. Marine Corps made a huge impression on his new boss after his car broke down and he walked 20 miles just to get to his first day on the job.

Walter Carr, 20, had a Nissan Altima that conked out on him just a day before he was to report to his first day of working for the Bellhops Moving Company.

Instead of finding excuses, Carr began walking in the dark from his home at midnight to arrive to his job on time that morning — a trip over 20 miles long. When his new CEO heard the news, Carr’s good deed was rewarded with a replacement for his broken-down car.

Around 4 a.m., Carr was spotted by police officers that took him out for breakfast before dropping him off to his destination, AL.com reported.

When Carr arrived at the home of his first-day client, Jenny Lamey, she offered to let him rest before the rest of his crew arrived, but he politely declined and got straight to work instead.

Lamey wrote on Facebook, “We chatted while we were working together early yesterday morning. He loved my kitchen and said that it was exactly the kind of kitchen he would want. He was from New Orleans. He and his mother lost their home in Hurricane Katrina and they came and made their home in Birmingham.”

Somehow my original post was deleted. Here is it again!! I am overwhelmed that it was shared over 800 times in one day!…

Carr’s worth ethic was admired by Lamey so much that she started a GoFundMe page for him to try and raise enough money to buy a new car. As of Wednesday morning, the page had raised $40,371 out of a $2,000 goal that was set.

The news of Carr’s dedication traveled fast — and even reached the CEO Luke Marklin. When Marklin heard about his new employee, he drove his car down from Tennesse on Monday and gave Carr the 2014 Ford Escape.

We've all seen the amazing story shared by Jenny about one of our bellhops, Walter Carr. Many have asked if we have any video from the moment CEO Luke Marklin thanked Walter for the perseverance he demonstrated on his first day w/ Bellhops Moving #TheWorldNeedsMoreWalters

“I am honestly blown away by him,” Marklin said of Carr. “Everything he did that day is exactly who we are – heart and grit. So far, he’s batting 1.000.”

According to Carr, his parents raised him to help others, and he has plans to use his new car to do just that.

“I want to thank God because without Him I wouldn’t be here,” he said.