Coddling in college – PC police on the attack - The Horn News 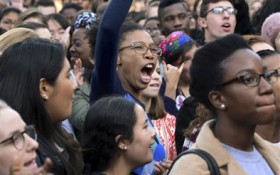 The political correctness police are on the offensive at American colleges across the country, and it has administrators terrified of being the next target.

At schools including Yale, Williams College and Wesleyan University, leaders have in recent weeks taken steps to assert the importance of the free expression of ideas, even those that some might find objectionable.

“I think that our students, probably more so than previous generations, come to college having been marinated in a media environment that does not foster productive conservation across disagreements,” Falk said in an interview.

A recent wave of campus protests nationwide has brought new attention to the issue, with some civil liberties advocates saying free speech is being eroded. The protests, including those that led to the ouster of the University of Missouri’s president, also have added to the pressure on presidents jobs.

Wesleyan’s president, Michael Roth, wrote a piece defending free speech in September after the student government moved to cut funding for the student newspaper over an op-ed piece on the Black Lives Matter movement.

A similar debate has played out at Brown University, where President Christina Paxson criticized the student newspaper over columns that the editors themselves deemed racist after they were published. Some faculty members said the administration’s actions suggested it wants student editors to suppress all opinion pieces that could be deemed offensive.

Here are some recent offensive changes forced by the PC police across the country:

Amherst College in Massachusetts is poised to part ways with Lord Jeff, the school’s unofficial mascot.

The mascot is based on 18th-century military general Jeffery Amherst. Along with his conquests in the British army, Amherst is known for suggesting a plan to deliver smallpox-infected blankets to Native Americans, although historians deny the plan was carried out.

Students protesting issued a list of demands last week, including the removal of Lord Jeff from all college memorabilia and imagery. Protesters demanded that the college president condemn the “inherent racist nature” of the unofficial mascot.

Students protested the names last week, staging a sit-in outside DeGioia’s office and declaring solidarity with protesters in Missouri.

The original motto is a French phrase that was adopted when the college adopted only men. Its translation: “Under the laws of Minerva we all become brothers.” But because the college has been accepting women since 1970, the motto will now end with “brothers and sisters.”

Princeton University in New Jersey said that faculty supervisors of dorms will no longer take the title “master,” as it is considered offensive. The supervisors will instead being called “head of the college.”

Dean of College Jill Dolan said in a statement that master is an “anachronistic, historically vexed” title, while the newly chosen replacement “better captures the spirit of their work.” Administrators announced the switch last week as students protested on campus, demanding better treatment of black students.

The protesters also urged the university to acknowledge what they say is the racist legacy of former school president and U.S. President Woodrow Wilson. They want the school to rename buildings and programs named for Wilson, among other demands.

Colorado Mesa University in Colorado had a tradition at the nurse pinning ceremony , where local Christian business group to give out bibles.

Under legal threat by atheist students who demand a change in “religious privilege,” the president of CMU announced he’s breaking with tradition, effective immediately.

University of Minnesota student government voted against holding an annual 9/11 ceremony, in part because it didn’t want to spread Islamophobia.

According to some protesters of the measure, “9/11 is often used as reasoning for Islamophobia that takes both physical and verbal forms. The passing of this resolution might make a space that is unsafe for students on campus even more unsafe. Islamophobia and racism … are alive and well. I just don’t think that we can act like something like a moment of silence for 9/11 would exist in a vacuum when worldwide, Muslim and Middle Eastern folks undergo intense acts of terrorism around the 11th of September each year, and have since 2001.”

It continues, “When will we start having moments of silence for all of the times white folks have done something terrible?”