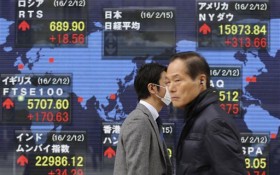 Eight years after the financial crisis, the world is coming to grips with an unpleasant realization: serious weaknesses still plague the global economy, and emergency help may not be on the way.

Sinking stock prices, flat inflation, and the bizarre phenomenon of negative interest rates have coupled with a downturn in emerging markets to raise worries that the economy is being stalked by threats that central banks — the saviors during the crisis — may struggle to cope with.

Meanwhile, commercial banks are again a source of concern, especially in Europe. Banks were the epicenter of the 2007-9 crisis, which started over excessive loans to homeowners with shaky credit in the United States and then swept the globe into recession.

“You have pretty sluggish growth globally. You don’t really have any inflation. And you have a lot of uncertainty,” says David Lebovitz, who advises on market strategies for JP Morgan Funds.

Some of the recent tumult may be an overreaction by jittery investors. And the rock-bottom interest rates are partly a result of easy money policies by central banks doing their best to stimulate growth in the years since the crisis.

Unemployment is low in several major economies, 4.9 percent in the United States and 4.5 percent in Germany. The IMF forecasts growth picking up from 3.1 percent last year to 3.4 percent this year.

But that’s still far short of the 5.1 percent growth in 2007, before the crisis. The realization is dawning that growth may continue to underperform, and that recent turmoil may be more than just normal market volatility.

In Japan, the yield on 10-year bonds briefly turned negative, meaning bondholders were willing to pay the government for the privilege of being its creditor — for years. In the United States, long-term market rates are sliding again, even though the Federal Reserve has begun pushing them higher. Many government bonds issued by European countries trade at yields that are negative or close to zero.

That’s alarming because such low and even negative rates are way out the ordinary. For one thing, they suggest bond investors don’t expect enough economic growth for central banks to raise rates.

Along with that have come sharp drops in global stocks. The Standard and Poor’s 500 index is off 10.5 percent for the year; Japan’s Nikkei 225 is down 16 percent; the Shanghai composite index 22 percent; Germany’s DAX over 14 percent.

“The world looks worse than it did six months ago,” says Eric Lascelles, chief economist at RBC Global Asset Management. “Growth forecasts have come down. Risks have grown.”

Here are some of the risks that markets have been waking up to.

A sharp slowdown in China threatens to remove a pillar of global growth. Slackening demand for raw materials there is hitting producers of oil and metals in other countries. Energy exporter Russia, for instance, slid into recession and its currency has plunged.

German automaker Daimler made a record operating profit of 13.8 billion euros last year, helped by a 41 percent surged in sales in China for its Mercedes-Benz luxury cars. But its shares fell when it announced a cautious outlook for only a slight profit increase for 2016 and “more moderate” growth in China. CEO Dieter Zetsche cautioned that he saw “more risks than opportunities” amid “restrained” global growth.

Money is flowing out of so-called emerging markets like Brazil, Russia, South Africa and Turkey. Investors pulled $735 billion out such countries in 2015 — the first year of net outflows since 1988, according to the Institute of International Finance.

And emerging markets aren’t so emerging any more: they provide 70 percent of expected global growth.

Central banks led by the U.S. Fed responded to the global recession by slashing interest rates and printing money. That encouraged investors in search of higher returns to place their money in emerging markets.

Now the Fed is trying to push up its interest rates, and those flows have gone into reverse, causing financial markets and currencies in emerging markets to sag. Debt becomes harder to repay.

“Unless we’re going to paralyze monetary policy in the advanced economies forevermore, it is inevitable that the funds that have gone into emerging markets are going to come back out of them,” he said.

The other pillar of the global economy besides China, the U.S., is also now showing signs of weakness. Maybe not a recession, yet. But growth was a weak 0.7 annually during the fourth quarter. Factory output has declined.

Though unemployment has dropped, wages have not recovered quickly and companies appear to be unsettled by the global jitters.

A rising dollar — a side effect of expected Fed interest rate increases — could hurt exporters. That’s one reason the Fed may in fact hold off raising rates again soon.

Banks stocks have been plunging in the U.S. and Europe.

In the U.S., low oil prices may mean companies involved in expensive oil and gas extraction will be unable to repay loans made to dig wells that are no longer profitable.

In Europe, bank shares have been shaken by the bailout of four Italian lenders and fears about 1.2 trillion euros ($1.35 trillion) in bad loans across the 19 country currency union.

John Cryan, co-CEO of Deutsche Bank, had to take the unusual step of publicly reassuring that the bank’s finances were “rock-solid” after investors pounded the bank’s stock.

The spread of negative interest rates could reduce banks’ profitability, since it squeezes the different between the rates at which banks borrow and at which they lend.

Sick banks can choke off credit to companies and dump huge costs on governments, shareholders and creditors.

With interest rates below zero in some cases, it’s much harder for central banks to apply more stimulus if needed.

Low rates and stimulus in the form of bond purchases — using some $3.6 trillion in newly printed money in the case of the Fed — have driven up stocks worldwide.

So markets may be realizing this is one downturn where the central banks can’t ride to the rescue as before.