What!? Colin Kaepernick named "citizen of the year" - The Horn News 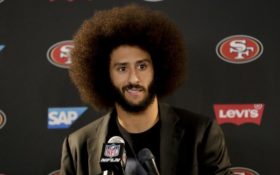 Still operating as a free agent and not having been signed to any NFL team, Colin Kaepernick is definitely not in the running for player of the year.

So the unemployed Kaepernick was awarded something else.

GQ magazine has decided the division he brought to what used to be the light-hearted game of football deserves an award – and named him “Citizen of the Year” for being the first to take a knee during the National Anthem.

The demonstration sparked a wave of NFL protests by players during the anthem that repeatedly have been denounced by President Donald Trump.

These political protests by people paid to entertain also resulted in embarrassingly low ratings for the NFL, as they realized majority of their fans indeed do love America.

Kaepernick parted ways with the San Francisco 49ers in March and hasn’t been signed by another team. There was rumored interest from the Baltimore Ravens after quarterback Joe Flacco suffered an injury, but they were quickly turned off when Kaepernick’s girlfriend disparaged owner Steve Bisciotti and former player Ray Lewis in a tweet.

The tweet made a disgusting comparison of Bisciotti and Lewis to a slave and a slave owner from the film ‘Django Unchained.”

Regardless of controversies, Kaepernick is gracing the cover of GQ magazine this month.

He says on Twitter he’s “honored” by the recognition.

The magazine ’s story includes comments from several of Kaepernick’s supporters and confidants. Rapper J. Cole says Kaepernick “sacrificed his dream” to stand for something. Ninety-year-old singer and activist Harry Belafonte says seeing people like Kaepernick taking action is “the greatest reward” he could ask for.

But while his allies are speaking up in the article, patriots who disapproved of Kaepernick of loudly protesting his recognition.

He drew attention to the number of military veteran, actual heroes who would’ve have been much more deserving recipients of the award.

“Apparently, GQ seems to think that disrespecting our military and spitting on our flag is a symbol of heroism and manliness,” he wrote.

If Colin Kaepernick, the man who wore socks depicting cops as pigs, is GQ's Citizen of the Year, then I am proudly and unabashedly NOT a GQ citizen.

Another drew attention to the unfairness to veterans and those who actually dedicate their lives to our country.

Wear socks depicting police officers as pigs; wear Fidel Castro as a fashion statement IN MIAMI; sue NFL for collusion when gf compares owners to slave owners…
Win Citizen of the Year.
Serve in the US military…nothing. What a joke, GQ. #Kaepernick