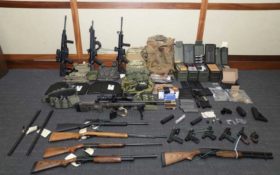 A Coast Guard lieutenant accused of stockpiling guns and drafting a hit list of prominent Democrats and TV journalists is scheduled to be sentenced on Friday for his guilty plea to firearms and drug offenses.

Christopher Hasson, 50, faces a maximum of 31 years in prison at sentencing by U.S. District Judge George Hazel. He pleaded guilty in October to possessing unregistered and unserialized silencers, being a drug addict in possession of firearms and illegal possession of tramadol, an opioid painkiller.

Federal prosecutors recommended a 25-year prison sentence for Hasson. They have called him a domestic terrorist and self-described white nationalist who was intent on carrying out mass killings. But they didn’t file any terrorism-related charges against him.

Defense attorneys urged Hazel to spare Hasson from a prison term and sentence him to jail time served since his February 2019 arrest. Hasson’s lawyers accused Justice Department prosecutors of fabricating a bogus narrative that the married father of two grown children was planning a terrorist attack.

After Hasson’s arrest, prosecutors filed a memo in which they said the Coast Guard officer “intends to murder innocent civilians on a scale rarely seen in this country.” They also said Hasson drafted and tried to delete a June 2017 email in which he wrote that he was “dreaming of a way to kill almost every last person on the earth.”

Hasson’s attorneys urged the judge to “strip away all of the speculation and rhetoric” and sentence Hasson “proportionately” for the crimes to which he pleaded guilty.

“The government’s unproven claims about his private thoughts and beliefs and its conjecture about his plans and motives have no place in the sentencing courtroom and should have no bearing on the outcome,” they wrote.

Hasson ordered at least 4,650 tramadol pills from internet distributors and had them shipped to his homes in Maryland and Currituck, North Carolina, according to Assistant U.S. Attorney Thomas Windom. The prosecutor said Hasson consumed most of the pills, often at work.