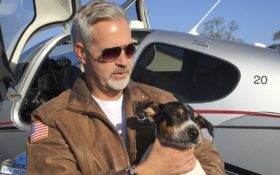 The U.S. Coast Guard has ended its search for an Oklahoma doctor who disappeared last week over the Gulf of Mexico while flying his small plane to collect a disabled dog in Texas.

“Ending a search is a difficult decision that we put the upmost thought and consideration into,” Guard Capt. David Cooper said.

Kinsinger, of Edmond, Oklahoma, had been flying his Cirrus SR22T to Georgetown, Texas, to collect the disabled Husky that was destined for a foster home in Oklahoma. But he never landed at the suburban Austin airport and overshot his destination by hundreds of miles. Authorities believe he may have lost consciousness due to hypoxia, a lack of adequate oxygen.

North American Aerospace Defense Command, or NORAD, dispatched fighter jets to try to steer him back on course, but to no avail. Two F-16 fighters flew in front of the five-seater plane, dropped flares and performed other military maneuvers, but Kinsinger, who was the only person on board, appeared to be unresponsive, NORAD spokesman Michael Kucharek said at the time.

When the F-16s became low on fuel, they were replaced by two F-15 fighters that stayed with Kinsinger for a while but eventually had to return to base because of darkness and their proximity to Mexican air space.

Kucharek said NORAD coordinated with the Coast Guard to take over monitoring the plane. The Guard, which was relying on the FlightAware website, lost track of the plane when it stopped transmitting a signal, Coast Guard Petty Officer Travis McGee said.

Kinsinger, an anesthesiologist, had been flying a rescue mission for the nonprofit Pilots N Paws. Organizers said he generally flew two volunteer missions a week, and that he had been considering buying a larger plane so he could fly longer routes and transport more dogs.

“He was an exceptional person who was very motivated,” said Rachelle Hurd, a resident of Erie, Colorado, who helps coordinates flights for Pilots N Paws. “I don’t think the guy ever slept.”