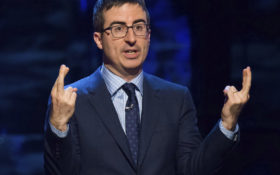 Coal company Murray Energy has sued HBO and its Sunday-night host, John Oliver, for what it says was a “false and malicious broadcast” last Sunday evening. It’s seeking financial damages and a court order barring rebroadcasts of the segment’s “defamatory statements.”

He ribbed Murray Energy’s CEO Robert Murray, who blames regulatory efforts by the Obama administration for damaging the coal industry. He said the 77-year-old looked like a “geriatric Dr. Evil” and noted that the company had fought against coal safety regulations.

The Ohio company sued the comedian Wednesday afternoon in circuit court in West Virginia, saying that he tried to embarrass Murray by making fun of his age and appearance and made false statements about a 2007 collapse of a Utah mine, when nine miners died. The company said Oliver ignored information it sent the show that it says showed an earthquake caused the mine’s collapse and that the show made no mention of “the efforts Mr. Murray personally made to save the trapped miners.”

An HBO spokesman says the show didn’t violate Murray Energy’s rights or those of Murray. Oliver noted on the show that Murray Energy has a litigious past, and last month sued the New York Times for libel.

Murray Energy employs about 5,400 people, about half of those in West Virginia.