CNN's boss was furious when he learned... - The Horn News 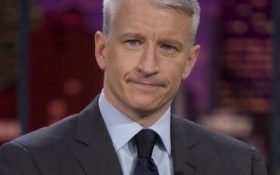 CNN used to call itself the most trusted name in news. Now, after years of ratings declines (CNN’s primetime stars draw less viewers than 20-year-old sitcom reruns), the pressure is building at the cable news network.

It’s no surprise, then, that CNN’s Anderson Cooper is desperate to hide another nasty scandal at the network Wednesday.

Unfortunately for Cooper, though, The Horn News has uncovered the truth.

Michael Cohen’s lawyer, Lanny Davis, made a bombshell statement during an interview with Cooper on Wednesday, which totally debunked a previous CNN report that Cohen claimed “Trump knew in advance about the June 2016 meeting in Trump Tower in which Russians were expected to offer his campaign dirt on Hillary Clinton,” and that the former lawyer “is willing to make that assertion to special counsel Robert Mueller.”

CNN told viewers in July that they had “anonymous sources” confirm the story. Their report quickly spread across the mainstream media, and was even used by Democrats as fodder to attack President Donald Trump.

But Davis said that wasn’t true, and CNN’s facts “got mixed up in the course of a criminal investigation.”

“So, Michael Cohen does not have information that President Trump knew about the Trump Tower meeting with the Russians beforehand, or even after?” Cooper asked.

“No, he does not,” Davis responded.

It appears the network tried to cover-up the lie. “The revelation made during the interview was not promoted by CNN as two tweets on the ‘Anderson Cooper 360°’ Twitter account that contained video clips from the segment conveniently did not include the portion where Davis made the revelation,” The Daily Wire reported. “CNN also did not publish the interview on their YouTube channel.”

Yup. CNN is busted in a nasty anti-Trump lie… again. So they tried to cover it up.

But the damage has been done. After decades of mistruths, intentional misinformation and flat-out lies like this, CNN’s ratings — and it’s reputation — are firmly in the toilet.

According to Fox News, CNN is now considered the least trustworthy news brand by American voters — 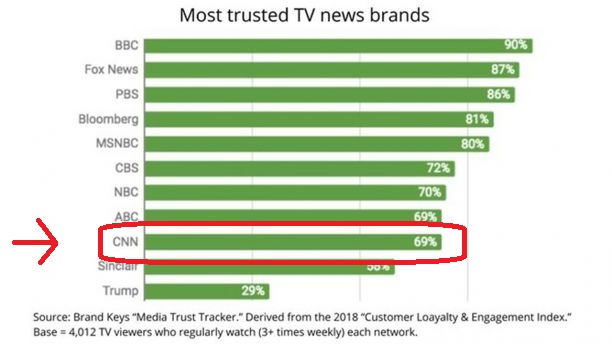 But the worse CNN does, the more the network seems to suffer from Trump Derangment Syndrome.

Rather than take an honest look in the mirror,though, liberal executives at the network doubled-down this week.

Trump praised a CNN political commentator Paris Dennard for doing a “wonderful” on Monday when Dennard defended the president’s conduct to a former counterterrorism official that was appearing on the show.

Just two days later, the network fired Dennard without warning for “inappropriate conduct”… from four years prior. At a previous employer.

CNN has gotten so bad, more and more Americans are tuning them out every day.

The more reasonable Americans tune them out, the more whacky the CNN anti-Trump echo-chamber seems to get.

It’s a clear downward spiral. And soon enough, the bottom line will become so bad that the boss won’t be able to turn a blind eye anymore.