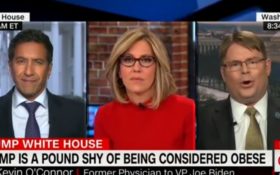 That’s according to a pundit at the controversial news network, who also pronounced that Trump’s health assessment from his doctor wasn’t true and that he was on death’s door.

On Monday, Trump’s personal physician declared the president in “excellent” health. CNN doesn’t want the American people to believe that, however, and brought in their own health expert who reached jaw dropping conclusions about Trump from video.

According to host Alisyn Camerota and medical analyst Dr. Sanji Gupta, Trump is “borderline obese,” has heart disease, and will have a heart attack in the next “3-5 years.”

This is despite another doctor, Dr. Kevin O’Conner — the personal physician of Vice President Joe Biden –telling the two that Trump’s health numbers aren’t a concern by any stretch of the imagination.

Camerota, not getting the answers she was fishing for from Dr. O’Conner, then turned to Dr. Gupta and told him how to diagnose the president. Gupta complied.

Camerota predicted Trump would have a “heart attack or heart disease” within “3-5 years.”

Gupta then declared: “The president has heart disease.”

Not only is this health assessment by CNN wrong, it’s completely unethical.

Folks, this is the kind of insanity the mainstream media is pushing on the American people every day… and it is only the beginning.

Despite Trump also passing a mental fitness examination with a perfect score, for example, CNN host Brian Stelter rushed Monday to dismiss the findings of a trained medical professional… and attacked Trump voters for saying it proved the president was fit for office.

Here's how the next few hours will go. Trump supporters will say "Concerns about Trump's mental health were always absurd. Case closed now." The obvious response: "The Q's about fitness for office are serious. Someone could be sharp as a tack, but still unfit"

It’s so unfair and biased, it’s mind numbing. It’s no wonder CNN is constantly one of the worst in television ratings. Who could watch this to stay informed!?

You can see the jaw dropping footage here —