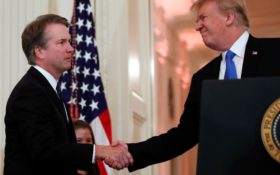 Americans are increasingly wary of the left-leaning news network. Since last year, ratings for CNN are down 41 percent.

In just 16 words on Tuesday, Cillizza showed why more and more Americans are changing the channel.

No big deal: Just the president telling the FBI to ignore an allegation of sexual assault https://t.co/lvO8w9ccOm

That is completely untrue, of course. Trump never told the FBI not to investigate.

Trump told reporters, “I don’t think the FBI really should be involved — because they don’t want to be involved”

“If they wanted to be [involved], I would certainly do that. But as you know, they say this is not really their thing,” the president said.

In other words, Trump said he’s support the FBI investigating the accusations against his own Supreme Court nominee — if the FBI said they were interested.

The FBI has publicly said they’re not interested in opening an investigation… so Trump says he supports that decision.

Cillizza is clearly lying when he told readers that Trump ordered the FBI to stand down.

Meanwhile, the allegations against Kanavaugh have taken another hit after Patrick Smyth — a reported eyewitness to the sexual assault — came forward Tuesday to deny any event happened.

He’s the second eyewitness to come forward and deny any memory of the alleged event.

How will CNN spin that statement?