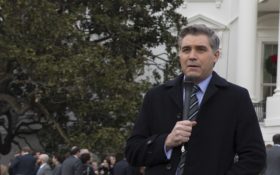 Acosta announced he was suing the White House for revoking his press credentials this week after an ugly incident at last Wednesday’s press conference.

Video of the incident shows Acosta refused to give up his turn after asking two questions and, when asked to stop shouting, tussled with a young White House intern that tried to take back the microphone. Later that day, the White House revoked his press access.

After filing the lawsuit against President Donald Trump, the uniformed secret service agent that took his credentials, White House press secretary Sarah Huckabee Sanders (and others), Acosta has faced a serious backlash from his fellow reporters.

Instead of being defended by other journalists, Acosta’s latest stunt was met with a collective groan of annoyance.

Once again, Acosta made the story about him — and this time, the mainstream media is fed up.

According to reports, serious journalists in the White House press pool are sick of these attention-grabbing stunts.

A few CNN reporters told me that they’re embarrassed by Acosta & CNN. A WH correspondent from a major network (not Fox) told me “This isn’t the Jim F*ing Acosta Show. We all hate him. He’s an asshole and he actually is disrespectful to the president.”

Even one of Trump’s harshest critics has become so fed-up with CNN he has publicly condemned the cable network — and Acosta — on Tuesday.

Woodward told the crowd that too many people in the media “have become emotionally unhinged.”

“In the news media there has been an emotional reaction to Trump,” Woodward said. “Too many people for Trump, or against Trump, have become emotionally unhinged about this.”

He called for the end of the lawsuit, and implied that Acosta was bad at his job.

The White House responded to the lawsuit through a statement saying Acosta “impeded the ability of the President, the White House staff, and members of the media to conduct business.”

“The White House cannot run an orderly and fair press conference when a reporter acts this way, which is neither appropriate nor professional,” Sanders said. “The First Amendment is not served when a single reporter, of more than 150 present, attempts to monopolize the floor.”

Should Jim Acosta be banned from the White House? Vote here —

Should Jim Acosta be banned for LIFE?