CNN just got DESTROYED by Trump - The Horn News 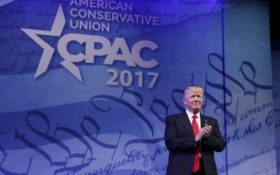 The room was at maximum capacity when President Donald Trump took the stage at the Conservative Political Action Conference (CPAC) as “Proud to be an American” played over the loud cheers coming from the anxious crowd.

It was the moment the audience had been waiting for since the beginning of the conference, and the excitement was apparent in their standing ovation that never ended.

Trump joked that the media wouldn’t cover that he received a standing ovation since everyone never sat down, and then he unleashed wrath on the fake news — and destroyed CNN in the process.

Trump addressed the crowd, whom he referred to as “my friends,” and began slamming fake news, which he called, “the enemy of the people.”

But there was one news source that he specifically addressed as the worst of them all, and it was no surprise to the conservative audience.

“The Clinton News Network is one of them,” Trump said, slamming dishonest CNN for their consistently negative, incorrect coverage of him.

“You think they’d fire the pollster, maybe they’re bad at polling,” he joked with the crowd.

And then he unleashed a list of news sources that failed to accurately inform the American people: “ABC, CBS, NBC,” calling them, “so bad, so inaccurate.”

He gave an example of the media’s manipulation when he referred to reporting regarding Trump’s original statement that the fake media is the enemy of the people… and the liberal media dropped the word fake.

He called out the use of anonymous sources, saying “A source says Donald Trump is a horrible, horrible human being. Let them say it to my face!”

As the crowd cheered, he offered an encouraging call to action, “We have to fight it. They’re very smart, and they’re cunning. They get upset when we criticize their coverage,” Trump said. “We’re going to go out and we’re going to speak our minds. I was fighting for you, and will keep fighting for you.”