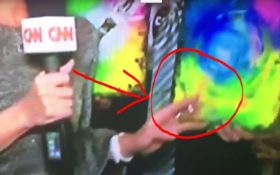 CNN reporter Randi Kaye stirred up controversy on Monday when she rang in the New Year in Colorado… by helping drug users get high while live on-air.

Reporting from Denver, Colorado, where marijuana was legalized on the state level in 2012, Kaye reported on a party bus and a “puff and paint” party where marijuana users partied openly with the drug.

Kaye passed lit joints to revelers, and at one point helped light a gas mask bong for one user.

“I just want to point out, that this is all legal in Colorado,” CNN host Anderson Cooper mentions to his co-host, but warned Kaye her actions were a “bad idea.”

While legal in the state of Colorado, marijuana technically remains a federally banned substance.

Discover the powerful secret that could keep you young [sponsored]

Some social media comments made jokes about the situation, and claimed that New Year’s Eve is a time to party. But others were quick to point out that Kaye’s casual attitude could encourage younger viewers to indulge.

I want to thank #CNNNYE #CNN for teaching my 7 & 10 year old daughters how to smoke pot on NYE. Really classy.

You can see the controversial segment below —

What are your thoughts on this video?

Should CNN be encouraging drug use?