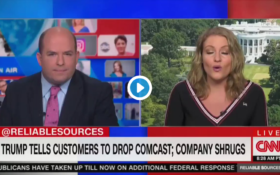 President Donald Trump is demanding CNN apologize for their “sexist” treatment of his aide.

His legal adviser, Jenna Ellis, complained she was subjected to a “sexist and demeaning” interview over the weekend with CNN star Brian Stetler.

And it didn’t take long before the controversial segment went viral.

Stetler, known as an anti-Trump host with a liberal bend, went after Ellis when she mentioned the term “fake news media.”

Stetler continued to attack, accusing the Trump campaign legal advisor of using “slurs and smears” to attack the media and journalists who are trying to do their jobs.

Ellis went on the offensive.

“You’re not trying to do your job,” she said.

“You’re not a journalist, Brian,” Ellis said. “You’re an activist.”

“That’s the problem,” she continued. “You have an agenda and your agenda is anti-Trump. The American people see through that and they are very grateful that this president is finally holding the fake news media accountable … ”

Stetler was left stunned and shortly after concluded the interview.

But the Trump campaign isn’t letting him off the hook. They want an apology.

“This kind of on-air meltdown and lashing out is completely unprofessional, yet it’s what we’ve come to expect from the leftists who hate President Trump,” Ali Pardo, the campaign’s deputy communications director, said in a statement.

“It would be great if so-called journalists would refrain from personal attacks and putting words in the mouths of the children and grandchildren of strong, smart, and independent women.”

You can watch a snippet of the segment below:

This is specifically re: her constant use of the term "fake news" to disparage real news outlets and destroy trust https://t.co/Cre8xsIQ6L