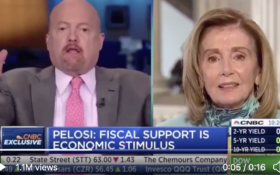 Cramer — the network’s kooky financial guru — had been interviewing House Speaker Nancy Pelosi when he called her by one of Trump’s famed nicknames: “Crazy Nancy.”

The face she made showed the nickname made her angry.

They had been speaking about congressional negotiations concerning a coronavirus stimulus package when Cramer let the insult slip on live television.

“What deal can we have, Crazy Nancy — I’m sorry, that was the president,” he let slip. “I have such reverence for the office, I would never use that term.”

It was too late and the damage had been done. Pelosi’s face locked up momentarily as if she couldn’t believe what he’d just said.

“You know what I meant,” Cramer replied.

“I know what you meant,” Pelosi continued, laughing off the comment. “I do.”

You can watch the clip below:

“What deal can we have, crazy Nancy — I’m sorry, that was the president” pic.twitter.com/H17HiPXysq

It seems as though Pelosi was truly offended and was thrown for a loop with the comment.

In many situations news anchors and politicians preview talking points before going live on-air. But even known for his on-air antics, it’s unlikely that Cramer rehearsed the Trump insult.

Pelosi, on the other hand, has been locked in a war of words with Republicans over the coronavirus stimulus bill.

While she and Senate Minority Leader Chuck Schumer, D-N.Y. have been clawing at the GOP to pass a second enormous coronavirus relief bill and rejected the conservatives’ “skinny” bill. Experts warn that the House Speaker is playing with fire.

According to CNBC, a many 2018 Democratic House winners could be in danger if they return to their respective districts without securing relief for those impacted by the pandemic.

She’s demanding that House stay in session until a bill is delivered — however long it takes — her way or the highway.