CNBC debate gets HUGE blowback from Republicans - The Horn News 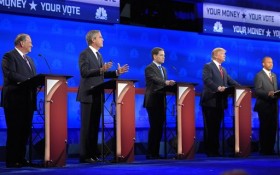 NBC is out after their network, CNBC,was heavily criticized for it’s poor moderation of the third GOP Presidential Debate.

Friday, the Republican National Committee announced it’s suspending its partnership with NBC News and its properties and won’t allow the network to co-host a presidential primary debate scheduled for February.

Priebus says the CNBC debate did not focus on economic issues as promised, and that candidates were asked questions that “were inaccurate or downright offensive.”

The RNC tells NBC it will still hold a debate as scheduled on Feb. 26 with its other planned media partner, National Review.

Even before the decision to break with NBC, several of the GOP campaigns had planned to meet to discuss complaints about how the party’s debates are being run.