"Clown Prince of Basketball" dies at 83 - The Horn News 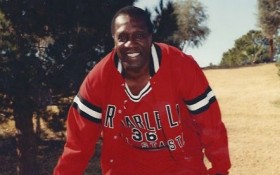 Meadowlark Lemon, a basketball legend who spent more than two decades touring with the Harlem Globetrotters, died yesterday at the age of 83.

Famed for his patented half-court hook shot, Lemon became one of the most recognizable faces in basketball and was an inductee into the Naismith Memorial Basketball Hall of Fame in 2003.

Lemon began his career with the Globetrotters in 1955, just five years after the National Basketball Association became integrated, and at a time when there were still a limited number of African American players in the NBA.

With amazing skills and a quick sense of humor, Lemon became a breakout star for the Globetrotters and appeared in numerous television shows and movies.

After his retirement, Lemon became a Christian minister. He had 10 children.