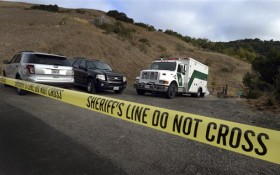 The three drifters sought in the murder of a tantra sex teacher, who was found shot to death on a scenic California hiking trail, have been caught by police.

The suspects were all arrested Wednesday in Oregon, two days after the body of Steve Carter, 67, was found next to his wounded dog on the trail in upscale Marin County.

Two men and a woman were taken into custody outside a community dining hall in Portland.

The Marin County Sheriff’s Office said none of the suspects has a known permanent address.

Pittman said the trio was tracked to Portland – more than 600 miles to the north – by detectives using GPS technology in Carter’s car and dozens of tips from people who thought they looked suspicious.

Detectives believe Carter drove to the trail near Fairfax in his car Monday evening. Another hiker found his body at about 6 p.m.

Stunned students and supporters mourned their beloved teacher who was shot multiple times and was still holding the leash of his wounded Doberman pinscher when he was found. The dog is expected to recover.

The Carters launched the Ecstatic Living Institute in rural Middletown, California, about 16 years ago to teach tantra to couples around the world. They held workshops nearby at the clothing-optional Harbin Hot Springs, which was destroyed last month in a wildfire.

“He was my mentor,” said Greg Whitmore, 37, a firefighter who attended several weeklong retreats led by the Carters. “It was intoxicating. People wanted to be around him.”

Last year, the couple turned the institute over to a former student, Logan Rose, and moved to Costa Rica in semi-retirement, teaching an occasional class. But soon after moving, Lokita was diagnosed with breast cancer.

“It has been a very traumatic season for us with Lokita’s cancer, then the Valley Fire that destroyed our beloved Harbin Hot Springs,” Rose said.

“This is the most devastating blow,” Rose said of the homicide. “We are heartbroken.”

“I’ve always been a super joyous person,” Gallasch said. “He knew intuitively that it was time to get a new name. He exuded a form of brilliance.”

A hiker found Carter’s body less than an hour after deputies responded to a report of shots fired and didn’t see anything suspicious.

Carter’s brother, Michael Carter, said he knew of no one who disliked his brother.

“I can’t imagine that it’s anything other than a random thing,” he told the San Francisco Chronicle. “All of it seems very random and unbelievable. Nothing makes any sense.”