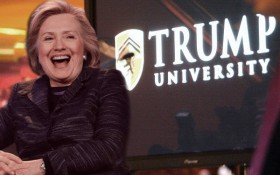 It’s a budding scandal that could be a potentially disastrous headache for GOP frontrunner Donald Trump.

A fraud suit involving his notorious Trump University appears set to go to trial just a couple months before the 2016 election. The $40 million suit, which will likely dominate news coverage, could be a public relations nightmare for Trump at a crucial time.

And that could be exactly what Democrats want. Because fresh questions are being raised about the Hillary Clinton crony who is driving the lawsuit, and who even plans to put Trump on the witness stand.

That could put Trump on the stand just months before the general election scheduled for November. And even if Trump ultimately wins, such a public scandal would come at the worst possible time for his presidential campaign.

The trial almost seems designed to create election-year chaos — and, in fact, it might be.

Schneiderman, who has aggressively pursued the case against Trump, is a Democrat and outspoken Clinton supporter. He’s a member of Clinton’s New York leadership team, and publicly endorsed Clinton’s presidential run.

And now, he just happens to be in a position to set Clinton’s political rival up for a potentially fatal election-year embarrassment.

The fact that a major Clinton supporter is in the driver’s seat for a case against Trump has raised questions about whether the suit is more about politics than protecting students.

Even more outrageous is that Clinton, despite being the subject to a constant whirlwind of controversy and at least four federal investigations, has somehow completely escaped Schneiderman’s attention. And that’s despite the fact that the New York-based Clinton Foundation has been accused of multiple wrongdoings, including not properly filing taxes in the Empire State.

Trump has repeatedly denied the charges against Trump University, saying it was a “terrific school” that claimed 98 percent satisfaction rate on internal surveys.