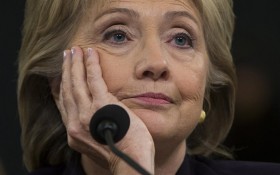 The Republican Party has announced they sent a formal complaint to the Internal Revenue Service on Tuesday, asking for an audit of the Clinton Foundation, a charity of former Secretary of State Hillary Clinton and her family.

The call for an audit comes in response to the Clinton Foundation’s refusal to correct suspicious, error-riddled tax returns they filed, and has raised questions among conservative watchdog groups – Are the Clintons using these charities to hide millions in foreign donations?

According to multiple reports, The Foundation’s flagship program – the Clinton Health Access Initiative (CHAI) – has received millions in funding from foreign entities, but has for years refused to disclose certain donors, as under some foreign laws these donors cannot be disclosed without prior permission from each of them.

CHAI conceded earlier this year it had misreported by millions of dollars the money it was given by governments compared with non-government donors in its tax returns for 2012 and 2013, and had originally announced it would refile some of its tax forms because it had “mistakenly combined” some of these donations.

CHAI had previously refiled its 2010 and 2011 tax returns, and several tax experts have told media sources that it is odd for a charity the size of CHAI to make such large errors consistently.

Now, the acting chief executive Maura Pally of CHAI has announced the 2012 and 2013 tax errors are of “no material impact” and is refusing to refile the returns amid swirling questions about the charity’s financial support of Hillary’s presidential campaign.

In response, the Chairman of the Republican National Committee, Reince Priebus, has petitioned the IRS to audit the organization immediately.

“The American people deserve to know whether the largest philanthropic arm of the Clinton Foundation continues to misreport the funds it receives from foreign governments, and whether this might lead to the potential for further conflicts of interest,” Priebus wrote in a letter to the IRS.

A spokesmen for Hillary Clinton has refused to respond to multiple media requests for comment.

Some have accused the charities, which get millions from foreign governments, of being a clear conflict of interest for Hillary Clinton.

This criticism picked up in April of this year after the charities admitted that they did not comply with an ethics agreement Clinton signed for President Barack Obama as a condition of her becoming Secretary of State in 2008.